SOMEONE YOU KNOW by Olivia Isaac-Henry 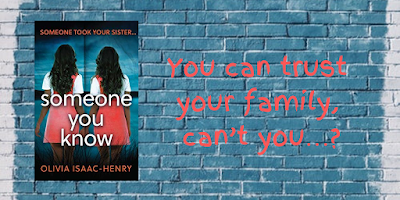 Publisher: Avon Books UK
Published: February 4, 2019
Pages: 336
Edie and Tess are trying to fit in. They live on the other side of the tracks, but they attend an upscale prep school. Edie is popular and Tess is a tag along. They're growing apart. They argue. They have different interests. One day after school, Edie goes missing. No one has seen or heard from her for the past twenty years. Tess thinks she ran off with her boyfriend.
One day Tess gets a phone call from her estranged father, saying a young girl's remains have been lifted from the local reservoir. No one can believe it. While the coroner runs an autopsy, Tess goes home to be with her father and other family members. After all, their the Piper family is tight knit. It turns out Edie was murdered, but something is off. A photo of her and Tess is missing from her bag. While the police investigate, Tess begins digging for answers as well.
Olivia Isaac-Henry has concocted a tale of intrigue and deception. The lead character, Tess, is one of the most complex characters I've ever read about. Even the supporting cast is complex. There's so many layers to the story, too. When you think you know a character, Olivia peels back another layer of the story to shake things up, keeping you on the edge of your seat.
Someone You Know is one helluva who-done-it. Olivia keeps you guessing. The story is split between the past and the present, which makes for a great reading experience. I think the way it is written also makes for rich characters. The characterization is top-shelf. The story never slows down. Someone You Know is a fast paced thriller. The build up is compelling and pulse-pounding. You have the right amount of description and delectable dialogue, making for a realistic feel.
Someone You Know has enough twists and turns to satisfy any reader. It's well written and Olivia delivers the goods with that ending. The atmosphere is incredible, too. I devoured Someone You Know in one sitting.  I also dig the cover. 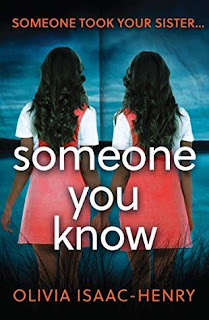 You can trust your family, can’t you…?
Tess Piper was fourteen when her adored twin sister Edie disappeared.
She has spent the last twenty years building a life away from her fractured family, desperate to escape the shadow of the past.
Only now she needs to confront the huge hole her sister’s disappearance left in her life, because a body has been found. The police are shining a spotlight on the Piper family. And secrets are about to surface.
After all, it’s common knowledge that more often than not, these crimes are committed by someone close to the victim. Someone they trust. Someone they know…
What really happened to Edie Piper?
Posted by Cedar Hollow Horror Reviews at 11:31 AM