Scaring Children In Real Life
By
Brian Fatah Steele
I believe it was 2012 when I got a text from one of my brothers. One of his friends was part of the Jaycees, a community service organization that hosted various community events. This friend was the chairman of that year’s Haunted House Attraction, something that had been an annual draw in my hometown for over forty years. The guy was in over his head and calling in favors from everyone he knew, including my brothers Nathan and Jordan.
SCARING CHILDREN IN REAL LIFE
One of them mentioned, “You know Brian writes horror novels, right?”
So I was brought in. Initially, it was just to help design some rooms in the Haunted House. It was an old YMCA on its way to being condemned, but we had it for one more year. I decreed more fake blood splattered on the walls, more strobe lights, and more general weird stuff. They had their standard characters from Hollywood, but I pushed for things unrecognizable. We had a cast of over forty, most of them teenagers who were happy to slap on makeup and scream insanities, so it worked out.
Somehow, I got roped into working the door. Not taking money, but dressing up in a suit and controlling the groups. In this capacity, I was able to tell tweens that we were going to gut them in the next room and staple gun their remains to the walls like a prop. There’s something very satisfying about releasing a group of crying kids into a fog-enshrouded room, knowing a dude with a chainsaw is lurking not far off.
The next year we moved to an old Elk’s Lodge, another type of civic organization that had transferred to a new location. This was another four-story structure that we had almost free reign in. Creepy dolls, psychotic hillbillies, ravenous zombies, killer clowns, and tons more of roaming nightmares. Fake doors, blackout mazes, collapsing brides, fog machines, and even the entire front of a truck that had its light and horn come to life when triggered by a motion sensor. Every weekend night of October, between twenty and fifty volunteers would scramble into costume and makeup, take their places, and terrorize for four hours. It was glorious.
This went on for another four years. Most of that time I was at the door. With my background as a writer, I was more effective with words than simply jumping out and screaming at someone. Standing there, holding the groups until I got the signal, I would casual tell them how we would be using their skin to make pretty dresses, or how the weakest was going to be dragged off into the basement to meet the butcher since tears were the best seasoning. I became extremely adept at picking out the most scared in a group and getting that person’s name. Of course, at that point I would bellow that person’s name and what color shirt they were wearing. The cackling laughter and repeating of their name from behind the door sent more than a few guests running from the line.
The goal of every night was to scare someone so much they peed themselves. It happened at least once a weekend, usually more than that. The screech of “We’ve got a pisser!” would be met with gleeful squeals and shrieks.
The Haunted House Attraction I worked at was by no means the largest or well-funded in the area, and there are a LOT in the Ohio/Pennsylvania/West Virginia tri-state area. However, we had multiple other Haunted Attractions come visit us, as we in turn visited them. They almost always said the said thing – we may not have had the money or the gadgets, the size or the supplies, but we had the most dedicated, insane actors they had ever seen.
2016 was the last year of the Haunted House. It’s hard to secure a building of the needed size that will allow its renters to build temporary structures inside. The local Jaycees chapter became the Beacons to further local goals, and the people of town have had to seek elsewhere for their Halloween scares.
As a horror author, I can tell you that there’s nothing like terrifying someone in real life. Getting that fear out of someone right in front of you is so visceral, there’s nothing like it. The tears, the screams, the begging. Everyone involved KNEW it was entertainment, they had paid for my cohorts and I to give them a scary experience. And we did. We did, and we enjoyed every minute of it.
One last thing.
Working at a Haunted Attraction, while fun, is also a lot of work. Usually manned by volunteers, terrible temperature conditions, limited restroom breaks, ridiculous legal restrictions, and your occasional abusive costumers. If you go out to enjoy a Haunted Attraction this season, thank the workers once you’ve finished. It’s a labor of love. 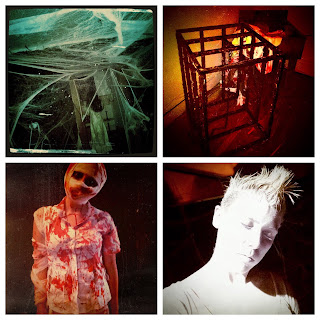 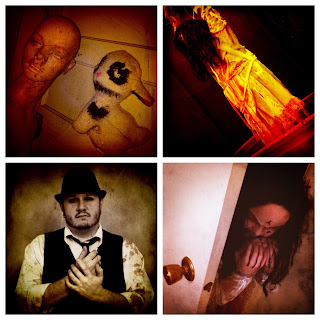