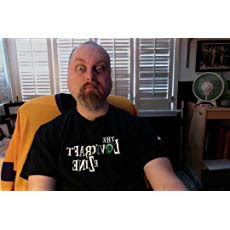 Interview with Ian Welke, Contributing Author to Doorbells at Dusk Anthology
When did you realize you wanted to be a writer?
Maybe when I first read Lord of the Rings as a kid. But I didn’t start writing seriously until much later. When Firefly was canceled I wanted more Firefly stories so I wrote one, changed the names, and it sold. Around the same time I wondered if I could turn some of my Call of Cthulhu RPG campaigns into stories, and one of those sold. Unfortunately, it can be very misleading when the first two of three stories you try and sell do. I got the wrong impression in a big way and didn’t sell the next ten or more I submitted.
What does your writing schedule look like?
I work best with a routine. When I get it, I write from about 7 a.m. to noon, have lunch, write until 2, take a 20-minute nap, and then write until 4. But that routine is often hard to get. I also write for an hour here and there on busy days. Some of the most difficult writing I seem to get done in hotels on trips. It varies by the difficulties of life.
Do you have any interesting writing rituals?
If so, what are they? I think they mostly involve caffeine. I also listen to a lot of music, create playlists, etc. in order to get me in the frame of mind for a story.
Do you like writing short stories or novels?
In some ways I prefer short stories. I do a lot of drafts when I write, so it’s easier to get to the drafts where things start to fit together with short stories. On the other hand I like being able to hit the big moments with novels as well as the divergent tangents that you don’t get to do with short stories.
How is the horror scene where you live?
I’m lucky enough to live in southern California. The Los Angeles chapter of the HWA is active and very friendly. There’s a great horror themed bookstore in Burbank called Dark Delicacies. And the presence of so many film people sets the bar for the Halloween decorations and haunted houses very high.
Do you use outlines or do you go with the flow?
I prefer to outline. But sometimes if I outline I can’t write what I’ve outlined. But if I go with the flow I get lost and wish I had an outline. It’s a mess and usually ends in tears.
How did publishing your first book or short story change your writing process?
The thing I wish I’d realized about my first novel being published, was that everything I learned writing it for some reason didn’t apply to writing the next one. They were very different stories, but I wasn’t prepared for the new problems I ran into. Eventually I hope I’ll get good enough that I’ll arrive at a regular methodology and not be overwhelmed by all the questions that pop up along the way.
What do you think makes a good horror story?
I think the reader needs to be rooted in the point of view character’s reality. The character doesn’t have to be likeable, but they have to be interesting enough to follow.

What famous haunted house would you spend the night in? Why?
I don’t know if I would. Well, I guess I’ve spent the night in some notoriously haunted hotels, does that count? I wouldn’t seek it out anyway. I’m not a big believer in the supernatural but the other explanations don’t make for a great night’s sleep and why poke the bear? 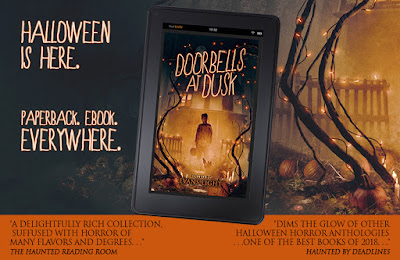 Who is your favorite horror monster or villain?
Does Herbert West count? I like Herbert West. He’s trying to help. Yeah he’s maybe a little over the edge. Or maybe David from An American Werewolf in London. I love the way he struggles with coming to terms with his monstrosity. Watching him disbelieving it and wondering if he’s just going mad is brilliant.
What is your fondest Halloween memory?
Trick or treating as a kid. All wrapped up in a mummy costume. Those costumes my mother made were so over the top and probably really dangerous now that I think about it. Either that or just drawing in grade school in October. It was the one time of year my pictures fit in with what the other kids were drawing.
Do you have any Halloween traditions?
I used to watch a horror movie per night during October. That’s sort of fallen off since the last couple of years have been insanely busy, but I’ll get a few movies in I’m sure. I also used to fill my five-gallon brew kettle with candy, but unfortunately the neighborhood has changed and if I do that now the only people I’ll be passing out candy to will be costume-less teens.
When Trick or Treating, what is the one candy you hope to get?
I always prefer sour candy to sweet. Except maybe Babe Ruths.
Which urban legend scares you the most?
I’m not familiar with enough urban legends to adequately
answer that.
If you were trapped in a horror book, which one would you choose?
I’m trying to think of one where I can weasel out of it and come up with a good outcome for myself but every bleak outcome I see is worse and worse. Dracula? Either get bitten or turned, and if turned, staked.
Next. Eyeing my shelf there, whole Laird Barron stack… nope those books mess with my sleep as is, don’t want to end up in that story. American Elsewhere that’s one the shelf in front of me, while there’s plenty of potential for bad outcomes for a character there’s also something really pleasant about that setting, it’s very Twin Peaksish. I’ll pick that one. At least I’ll have an interesting time before something terrible happens to me.
What are you currently working on?
I’m working on addressing edits for my upcoming third novel, Four Corners. It’s a crazy mix of history, horror, and weird scifi which should be out soon from Omnium Gatherum Books.
What is in your TBR pile?
Exploring Dark Fiction #1: A Primer to Steve Rasnic Tem, Gruesome: A Gathering of Nightmares, and Pop the Clutch: Thrilling Tales of Rockabilly, Monsters, and Hot Rod Horror.
What is the last book that scared you?
I just read Occasional Beasts by John Claude Smith. Several of the stories in that did the trick.
What is your spirit animal?
I’m not sure if they’re like me, but as I lose my mind I’ve been staring at pictures of otters more and more. I think I’m done humaning and would like to if at all possible take up being an otter instead.
What is your favorite beer?
When I was in York there were at least three that would easily qualify. Here in California I’m tempted to say Old Rasputin, but there’s one from New York He’Brew Rye IPA. That might be my favorite. Or here in LA, Angel City IPA. It’s difficult to choose.
If you could have a beer with one author, who would it be?
Does Patrick Rothfuss drink? If I gave him enough beer would it convince him to teach me the secrets of how to make a story that nice?
What is your story title and favorite scene from your story in Doorbells at Dusk (the Halloween anthology)?
My story is called “Between.” In it the protagonist either encounters or hallucinates a large number of spirits in Los Angeles. There’s one scene where she’s in a diner with the spirit of Darby Crash and, although I don’t name him since he’s still living, the memory of the 1970s Los Angeles Tom Waits. Writing that scene made me really happy.

Ian Welke grew up in the library in Long Beach, California. After receiving his Bachelor of Arts in History from California State University, Long Beach, he worked in the computer games industry for fifteen years where he was lucky enough to work at Blizzard Entertainment and at Runic Games in Seattle.
While living in Seattle he sold his first short story, a space-western, written mainly because he was depressed that Firefly had been canceled. Following the insane notion that life is short and he should do what he wants most, he moved back to southern California and started writing full time. Ian’s short fiction has appeared in Big Pulp, Arcane II, the American Nightmare anthology, and the 18 Wheels of Horror anthology, amongst other places.
His novels, The Whisperer in Dissonance (2014) and the Bram Stoker Award-nominated End Times at Ridgemont High (2015) were both published by Ominum Gatherum Media. 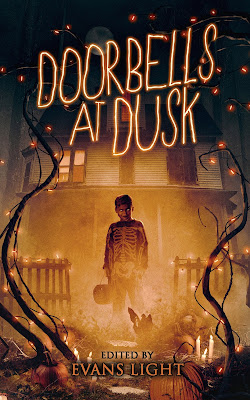 About Corpus Press
Corpus Press is a publisher of Horror and Weird Fiction, specializing in modern pulp that emphasizes plot over gore. Based in Charlotte, North Carolina, the press has garnered praise from SCREAM Magazine, Cemetery Dance, Horror Novel Reviews and Hellnotes for its BAD APPLES: SLICES OF HALLOWEEN HORROR series, the anthology DEAD ROSES: FIVE TALES OF TWISTED LOVE, and for its short story collections and novellas.
Follow Corpus Press for News on Doorbells at Dusk and much more:
Website
Facebook
Twitter
Would you like to feature?
If you would like to review Doorbells at Dusk, or have an interview or guest article, for a media publication, blog, or author blurb, please e-mail Erin Al-Mehairi, publicist, at hookofabook@hotmail.com.
Posted by Cedar Hollow Horror Reviews at 7:19 PM