WE SOLD OUR SOULS by Grady Hendrix 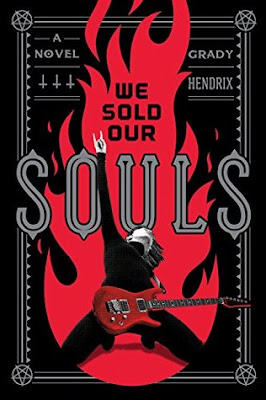 WE SOLD OUR SOULS is one helluva guitar solo. Grady Hendrix brings the heavy metal to the horror masses. I really enjoyed PAPERBACKS FROM HELL, so I figured I'd give this one a read. It's a compelling page-turner.

The story centers around a heavy metal band from the 1990s called Dürt Würk. The band was about to hit it big, but the lead singer Terry Hunt went solo. He rocketed to stardom as Koffin, while his former bandmates got mundane jobs. Two decades later, former Dürt Würk guitarist Kris Pulaski uncovers a disturbing secret from her past. Terry Hunt's success may have come at the price of his former bandmates. The title tells you everything you need to know, or does it?
Kris Pulaski must find answers. She hits the open road, reconnects with her bandmates, and confronts the man who destroyed her life. Grady Hendrix takes you from Pennsylvania to a Satanic rehab center and finally to a Las Vegas music festival. Some of the scenes are vividly brutal. Kris Pulaski is a top-notch hero. She kicks so much ass!
I like the author's writing style. WE SOLD OUR SOULS reads quick and the story flows smoothly. The feel-good ending wasn't what I was expecting, but it does leave hope, which is a good thing. I was expecting something darker, but it was still good. I felt like I kind of heard and read this story somewhere else before. It felt like a familiar story.

Overall, this story is enjoyable. If I'm being honest, I finished it rather quickly. The cover art caught my eye, but what kept me reading is Kris Pulaski, the female protagonist. She made the book better. I was right there with her the entire journey. I was cheering for her to kick some ass and she does. She is intelligent, strong, and she can handle her business.

I love books and stories based on/around music, especially rock and roll and heavy metal. It makes for a great read. WE SOLD OUR SOULS is heavy metal turned up to 11. You should give this one a read.