QUICKLY ON COSMIC HORROR
by Brian Fatah Steele
Cosmic Horror can mean a lot of things to a lot of people, and a clear definition is sometimes hard to hammer out. Most casual readers immediately conjure up the name H.P. Lovecraft and his tales of tentacles in Providence. Cosmic Horror, however, can be far richer and nuanced than that.
Cosmic Horror has its link with Weird Horror, but there is a distinction. Weird is unnerving and unknown, straying into the surreal but not far enough to be Bizzaro. While Cosmic has those unknown elements, it comes more from a sense of nihilism, from an uncaring universe that we have been born into where monstrous and/or powerful forces are at play that we cannot hope to ever possibly understand. This is also what sets it apart from Supernatural Horror in most cases, as there are clearly delineated aspects of “good and evil.” Also, Supernatural tends to less celestial in nature. That is not to say Cosmic is Sci-Fi Horror, although the two sub-genres have been known to blend, too. Ultimately, anything can be an amalgamation at the whims of the author’s imagination.
Along with Lovecraft, we have such classic writers as Robert W. Chambers, William Hope Hodgson, Clark Ashton Smith, Robert E. Howard, and Robert Block. They helped to form what we know of today as Cosmic Horror. Decades later, it would be names like Brian Lumley, Thomas Ligotti, Laird Barron, Mary SanGiovonni, and Ramsey Campbell. It has now evolved into something broader, yet sharper.
We are babbling little hunks of animated meat, utterly insignificant in the greater scheme of the universe. There are immensely powerful entities out there in the deeper dark that we would look upon as gods, that are far beyond our limited comprehension. Enslave us, destroy us, devour us, the best we can hope for is mind-shredding insanity before it comes. We could already be victims of a galactic manipulation and not even know it.
This is the horror of Cosmic Horror. As I detailed in my novel There is Darkness in Every Room, “there is no escape, there is no hope, there is no tomorrow.” Humanity had been subjugated for millennia and the knowledge of that didn’t change anything. In my forthcoming collection, Your Arms Around Entropy, I explore more precise themes. The fear that we have no control over our own destinies, that the afterlife is just as chaotic as life, that we could be used to satisfy the whims of a greater intelligence, and that behind a malleable reality waits something absolutely terrifying.
It doesn’t always have to be pessimism and madness. Cosmic Horror is a vibe, one easily turned into a pastiche. You can make it humorous or adventurous or even romantic. As long as that sense of oppression permeates, as long as that dread of Greater Things stays ever-present. That’s what makes the best Cosmic Horror, not the monsters. Although monsters are good, too.

A final note – If anyone is interested in learning more about Cosmic Horror, I urge you to listen to Mary SanGiovonni’s podcast “Cosmic Shenanigans” on iTunes, Spotify, Stitcher, and elsewhere. Her knowledge on the horror industry and its history is truly illuminating. 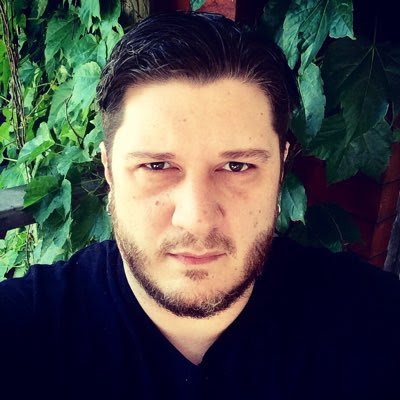 Brian Fatah Steele has been writing various types of dark fiction for over ten years, from horror to urban fantasy and science fiction. Growing up hooked on comic books and monster movies, his work gravitates towards anything imaginative and dynamic. Steele originally went to school for fine arts but finds himself far more fulfilled now by storytelling. His work has appeared in such places as 4POCALYPSE, BLOOD TYPE, WHITE FACE DEATH, 4RCHETYPES, DEATH'S REALM, THE IDOLATERS OF CTHULHU, PAYING THE FERRYMAN, and the Bram Stoker Award-nominated DARK VISIONS, VOL.1. His own titles include the urban fantasy novel IN BLEED COUNTRY, the post-mythic novella collection FURTHER THAN FATE, and the dark sci-fi collection BRUTAL STARLIGHT.Steele lives in Ohio with a few cats and survives on a diet of coffee and cigarettes. He spends his time still dabbling in visual art, vowing to fix up his house, acting as a part-time chaos entity, spending too many hours watching television, and probably working on his next writing project.
Posted by Cedar Hollow Horror Reviews at 4:42 PM