Interview With Daniel I. Russel 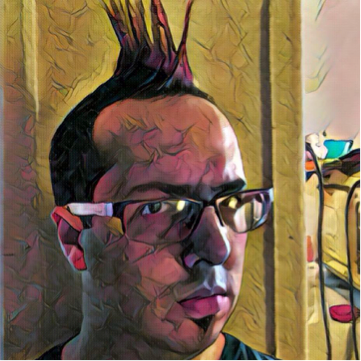 CHHR: Please give a brief introduction:
I’ve been called ‘The Saint of Splatter’, and also ‘one of the most disappointing reads ever’, but I like to live somewhere in the middle. This is Dan Russell, the eternal trier (take that as you like), hear to bore you with more wittering about horror and writing, and thanking you for having me, Curtis!
CHHR: When did you realize you wanted to be a writer?
At around 15 I was getting into Laymon in a big way. I think I read Endless Night in a day and thought…you know…I might be able to do this if I really tried. All my fiction assignments at high school were accordingly horror (“Every story doesn’t have to be horror, Daniel.” – Dan’s high school English teacher. True quote!), but this creative drive was replaced with music for several years. I was in a band until I realized just how social it is.
I took the first steps to what has now been a 14 year career at around age 23. I was teaching at a high school in a fairly rough area (“Why do I need to learn science? I’m just going to sell drugs like my dad. He probably makes more money than you.” – One of Dan’s lovely ex-students, circa 2003. Wonder if he achieved his dream?). I felt quite impotent with the violence and indifference around me on a daily basis, as you can’t hit kids apparently. I guess mentally chopping up people was quite cathartic?
Not that I’m saying we chop up trouble makers at high school! I’m not saying that at all! *Looks at camera*
CHHR: What does your writing schedule look like?
At the moment? None existent! I am currently completing a psychology thesis on expert memory, so struggle to find the time. Plus I forget my Windows password all the time, so am often locked out. My main writing season is summer, where I tend to crank out a novel and a handful of shorts. I have the writing shack out the back, complete with fan. Sorted. 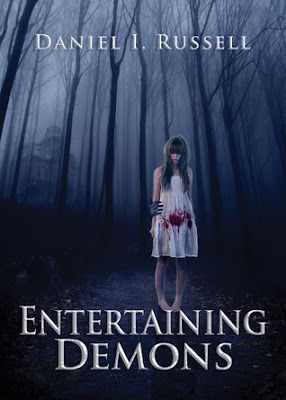 CHHR: Do you like writing short stories or novels?
I prefer to write novels, as it’s great to hold the finish product in your hand, look at all those words and know its 100% your hard work. But novels are a bigger commitment, so run the risk of a bad idea or plot draining your time resources.
Shorts are perfect for trying out new things. Better to dip into a new genre for example with a short story that might take a few days, rather than sinking weeks, even months, into a risky venture. Hell, this is how I started out writing horror. Short stories leading to novelettes and eventually to novels and even series.
Plus novels, from first word to box of author copies, can take years. Short stories, if they’re accepted and published, are the supporters at the side of the track, cheering you on and keeping you going as you complete the marathon of a novel.
CHHR: How is the horror scene where you live?
I might ask how the reading scene is where I live! You rarely see books in people’s houses, and horror is hardly mentioned. The fad books, your Twilights and 50 Shades, tend to do the rounds at the school railings, but that’s about it. I think every home should have a horror novel, either proudly on a shelf for all visiting dignitaries to inspect, or even better, hidden away like a dirty little secret. I also think that the horror novel should be mine, because I need the sales.
https://www.amazon.com/Entertaining-Demons-Daniel-I-Russell-ebook/dp/B071NPZCWS
Ahhh. Like the book, that advert was satisfyingly gratuitous… 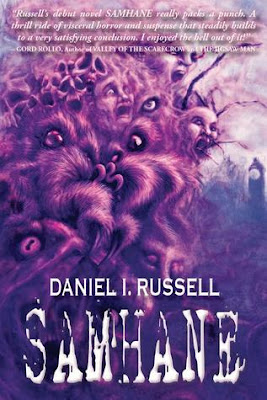 CHHR: How did publishing your first book or short story change your writing process?
Writing bootcamp! That’s what I call Samhane, my first novel. It was my first experience of being professionally edited.
When a friend of mine first joined the army, he told me how they were trained to clean their weapon to the highest standard. You would clean your weapon and present it. If it wasn’t good enough, you would be told to go back and do it again. After another cleaning and a second presentation, if it still wasn’t good enough, you’d be told to go back and do it again, after being punched in the face. He said the learning curve was steep, but the method got quick results!
This was how Samhane was edited.
Go back and do it again.
Go back and do it again.
God, I was so sick of seeing that manuscript! So now I always try to write a first draft as tight as I can, because I hate editing. Ha!
I also went into Samhane with one aim. If this was going to be my one and only novel, and with it being the first there was a good chance that after I finished, I’d be like, screw this, I’m not doing THAT again!, I wanted to make it as horrid, visceral, and taste pushing as possible. Some of the stuff in the original manuscript… man oh man. Of course, the original publisher refused to release the real top shelf stuff. At the time, young, dumb, and full of come as they say, I was irked that I’d have to agree to being censored if I wanted the book released. Now…I see it as a good thing. I’m now nearly 40 and not 23 anymore. Sexual violence can’t just be splashed onto the page for shits and giggles, to shock the reader, etc. It needs more substance, layering, to be justified. I take it a lot more seriously now.
CHHR: What do you think makes a good horror story?
The best horror stories give you an inkling of where they’re going and dare you to read on. And the cream of the crop will suddenly take you there by surprise, and when that realization hits... Like being told of a purple torture room. You wake up and the first thing you see are purple walls. That moment the realization hits and your stomach sinks. THAT’S the defining moment for me.
I always referred to myself as the emotionally unique (or as I was later diagnosed, ASD!), and it takes something with a real punch to get deep in my psych to feel an emotional reaction. I like it so dark and challenging, so damn offensive, that it reaches deep into me and makes me feel dirty, guilty, and amped up just for reading it and being complicit.
It’s my view that the purest horror should offend. Pure horror does not want to entertain you. Pure horror does not want to hold your hand. Pure horror does not want you to admire how clever or beautiful it is. Pure horror wants you to close your eyes and turn away, shaking.
Just my take, of course, and many have disagreed. Ha! 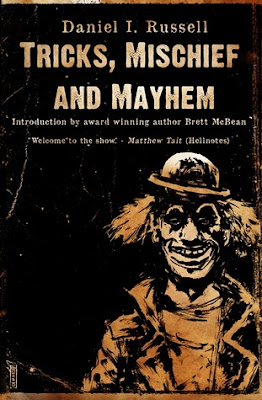 CHHR: What are you currently working on?
I have a psych horror novel in the works involving mental patients having their conditions pushed to breaking point. Lots and lots of psych theory and historical studies being carried out in the worst of circumstances. Lots of fun to write.
CHHR: What is in your TBR pile?
I have only read two books this year, if you can believe that. I’ve had to do so much journal reading for my research that I need my free time away from words! I put aside this old Leisure paperback from the 80s I need to get back to called Venom, which really is a child of its time (breasts, breasts, breasts!). I believe they’ve made a movie of it due out this year, with Tom Hardy playing one of the breasts.
I also collect Marvel hardbacks and have about 20 of them unread on my shelf. Finished Quasar this morning…
CHHR: What is the last book that scared you?
Now that is a tough one, as books don’t scare me per se, but more as I described earlier, but those I consider the best go for the gut punch, so I include disgust in this. Books that spring to mind are The Girl Next Door by Ketchum, Ritual by Masterton, The Association by Little (which is due a reread as I brought it out to Australia to read on the journey), 120 Days of Sodom by De Sade and…go on we can’t not have some King, let’s go IT and The Shining. Novellas? The Grief School by Matthew Tait does the job.
But it’s the shorts too! I always mention Matthew Fryer’s The Narcslaag, which I edited in Necrotic Tissue magazine, and Gary Kemble’s Saturday Night at the Milk Bar, who I edited in Midnight Echo 7 as my favourite two short stories. 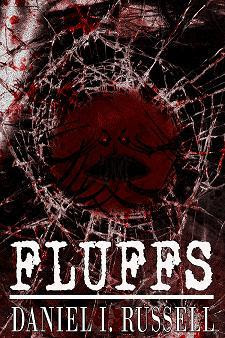 CHHR: What is your favorite horror book?
IT. My uncle gave me his battered old copy from the 80s when I was 11, the pages almost as thin as baking sheets. It’s a great horror novel as it’s the farthest you can go from being a one trick pony, and boy is it long, which scratches my itch for epic yarns, my itch for being cheap, as it has great mileage, and of course, my coulrophilic itch. I love me some clown action.
I was also disappointed that in the recent remake the kids didn’t get lost and have to find their ways out of the sewers.
…
That should get your comments up, Curtis.
CHHR: What is your favorite horror film?
JAWS. Don’t get me started on why, other than it being the perfect movie, dodgy looking plastic shark and all. Now there’s a story from my childhood worth sharing over a beer. Might also explain how I turned out the way I did… 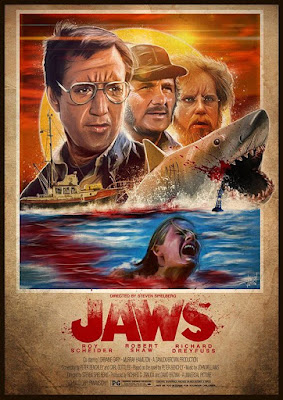 CHHR: What type of music do you listen to? What’s your favorite album?
If I had to, I suppose I could group my preferred listening into 90s grunge, dark dance, and punk stuff. Albums that regularly get a turn are American Thighs by Veruca Salt, Hitler Bad, Vandals Good by The Vandals, Smash by Offspring, 45 or 46 Songs That Weren’t Good Enough to Go on Our Other Records by NOFX, Tales from the Punchbowl by Primus, and a general mix of stuff like Prodigy, Chemical Brothers, Aphex Twin, Moby, etc. Favourite ONE?
CHHR: What is your spirit animal?
I have a scorpion tattoo and, as my Twitter followers should know, my house is regularly invaded by the damn things, so I’ll go scorpion. Changed from unicorn.
CHHR: What is your favorite beer?
Well that depends on the situation! Here in Australia, my favourite easily accessible beer is Boags, as it has a cleaner taste than most Aussie beers, which can taste a bit metallic at times. My preferred drops from back home in England, being an ale man, are Hobgoblin and Old Speckled Hen, but you have to pay the import price for them over here so they’re a rare treat. I could also drink Guiness and only Guiness if I had the money…
If any of the above want to see their product heavily featured in a horror novel, I’m quite willing to sell out for a year’s supply.
CHHR: If you could have a beer with one author, who would it be?
I guess it would be Ed Lee, as he’s my remaining extreme horror guru. Lee, Laymon, and Ketchum all brought their own dishes to the extreme horror table. All three tremendous influences: Laymon in my earlier years, Ketchum over the last decade. Lee is never far from the tbr pile and no one does extreme like him. He’s one of the rare authors that can make me laugh outloud, and not just a chuckle, but a fucking roar. We’d have a hoot over a beer…and hopefully a gross out contest, which I would surely lose. 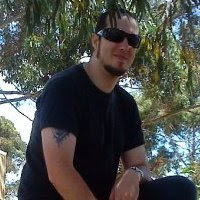 Posted by Cedar Hollow Horror Reviews at 10:16 AM