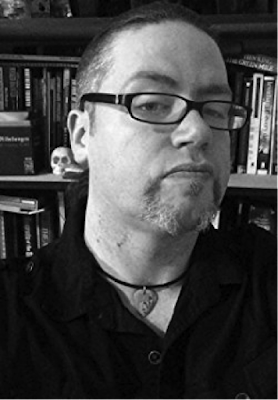 CHHR: Please give a brief introduction here.
My name is Curtis M. Lawson and I’m a writer of dark, weird fiction and comics. My work ranges from straight up horror and dark fantasy into genre bending slipstream kind of stuff. I also organize the Wyrd Horror Reading series in Salem, MA.
CHHR: When did you realize you wanted to be a writer?
Storytelling and writing have always been a part of me, from scribbled daydreams and song lyrics, to running D&D games and writing character histories. I first considered getting serious about it as a teenager, but I was more preoccupied with music and subculture in those days.
It wasn’t until my mid-twenties that I decided to give it a real go. My band had just broken up and I was in a bad emotional state. I decided that I wanted to explore a more solitary art form. Writing seemed the natural way to move.
CHHR: What does your writing schedule look like?
I’m a stay at home dad, so I have it easy compared to a lot of other folks. That being said, I also homeschool my kid, so I don’t get as much writing time as one might think. Mostly I try to write for two hours in the late morning while my son is doing school work.
I work a part time job on the weekends, so I don’t get much writing done then, but I use those nights to try and organize my thoughts for the coming week and prioritize my projects.
When I used to work full time, my writing schedule was much different. Almost the entirety of my first two novels were written on busses and trains, and during lunch breaks. 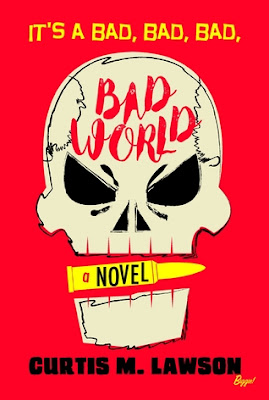 CHHR: Do you have any interesting writing rituals? If so, what are they?
Sadly, I’m kind of boring. I play some music, usually something that fits with the mood or theme of the book (I listened to a lot of old school country western and psychobilly while writing The Devoured), make a cup of tea and start typing.
CHHR: Do you like writing short stories or novels?
I enjoy writing both, but for different reasons. Novels take more time and planning, but I think I understand them better than I do short stories.With short stories I find it difficult to squeeze a meaningful theme, a good plot, and intriguing characters into such a small space. Because of that, I sometimes find that penning a well written short story can be more satisfying than finishing a larger work.
CHHR: How is the horror scene where you live?
Kind of incredible. I live in Salem, MA, and New England has a vibrant horror community. We have lots of indie friendly book stores that support us, and a lot of readers. There is an informal group called The New England Horror Writers I belong to that does a ton of events and has put out several anthologies with some big names in them.  There are several small presses based around the area including Haverhill House, Bloodshot Books, and Fundead Publications.
We seem to always have events going on. I’ve organized and hosted readings in Salem with Douglas Wynne, Christopher Golden, Jason Parent, Tom Deady, Matthew M. Bartlett, and a ton of other great writers.
Honestly, I could go on and on. It’s kind of incredible how much talent we have here. I feel very lucky to be a part of the New England Horror Community, and I treasure the relationships I’ve made.
CHHR: Do you use outlines or do you go with the flow?
I’m a big advocate of outlines. Without them, my work meanders with no direction and flickers out before I reach an ending. Even with short stories, I try to plan out the structure a bit before I sit down to write.
CHHR: How did publishing your first book or short story change your writing process?
From 2007 to 2015, I had only worked in comics.  My earliest work was self-published and my scripts were tailored to the individual artists I had hired. I was in direct communication with the artists and I could clarify anything in the scripts that might be too vague.
When I did my first graphic novel for QEW Publishing, I was suddenly writing for the editor, rather than the artist. Without that direct link to the person drawing the book, my direction and descriptions had to be crystal clear, which caused me to be more thoughtful with how I approached my scripts.
As for prose, my first published work was my novel, The Devoured. I had done the story as a “real book” instead of a comic for two reasons. First, I couldn’t afford to pay an artist. Second, with dozens of form rejection letters for comic projects over the years, I wanted to create something that succeeded or failed on my merit alone.
The Devoured was picked up by Winlock Press almost immediately after I finished it. I received a lot of positive feedback for the book, and some folks even recommended it for a Bram Stoker award.
Winlock wanted to see my next manuscript, which I didn’t have, so I got to work on something. My experiment with prose had been a success and I was suddenly focused on novels and short stories instead of comics. The whole experience revitalized me as a creator and imbued me with a new confidence. If The Devoured had not been published, I doubt that jump between mediums would have stuck. 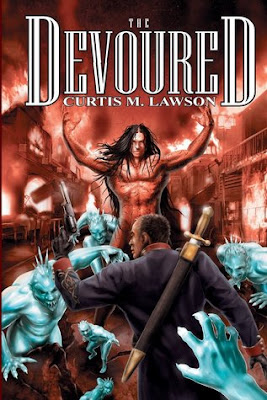 CHHR: What do you think makes a good horror story?
For me, it comes down to finding the right metaphor for the substance and theme. Great horror takes very real, everyday fears and dresses them up in extraordinary garb.
Birdbox is a great example of this. Fear of the dark, fear of the unknown, and the fear of being powerless are all so primal that everyone can relate. In brilliant fashion, Josh Malerman took these basic, instinctual fears and crafted a world where they were ever present.
I think all great fiction, regardless of genre, is about something deeper than the story and the plot. It should ask questions. It should force us to face things we are uncomfortable with. It should make us think.  Most importantly, great fiction should accomplish those things with subtlety and grace. Nothing kills a story for me more than heavy-handedness.
CHHR: What are you currently working on?
I’m working on a few short stories right now. One I will be submitting to a punk themed anthology. The other is a submission for the next New England Horror Writers’ anthology.  When those are finished I’ll be jumping into the third book in my Bad World series, which I anticipate will be the most over the top thing I have ever written.
CHHR: What is in your TBR pile?
I’m a slow reader so it is kind of huge. I just finished Boneland by Jeffery Thomas and I’m listening to Weaveworld by Clive Barker on Audible. High up on the list are Shiloh and Sacculina by Philip Fracassi, The Red Tree by Caitlin Kiernan, Monochromes and Other Stories by Matt Bechtel, They Feed by Jason Parent, Tijuana Donkey Showdown by Adam Howe, and The Parasite by Ramsey Campbell. I’m also about halfway through my journey to The Dark Tower, but I’m limiting myself to one of those a year.
On my Audible waiting list are Joe Hill’s NOS4A2, and The Talisman by King and Straub, and the new Michael C. Hall narration of Pet Sematary.
CHHR: What is the last book that scared you?
Not many books scare me. That being said, The Drowning Girl by Caitlin Kiernan did. It’s such a “soft” kind of horror that I wasn’t expecting to be scared, but the narrative was so riddled with the insanity that could switch from charming to terrifying with zero notice. The atmosphere was tense with self-doubt and impossibility. Some bits of the dialogue were downright haunting. I found myself genuinely spooked at many points.
CHHR: What is your favorite horror book?
IT is my favorite horror book. That’s a cliché answer, but it’s true. I usually find giant doorstopper books to be unnecessarily dense and I think a lot of authors could benefit from a greater appreciation of brevity. That being said, IT justifies its size with every page. Asides and meanderings that would bother me in other books work in IT to create a beautiful tapestry of atmosphere, theme, character, and plot.
I don’t like to throw around the term masterpiece, but King deserves it in this case. 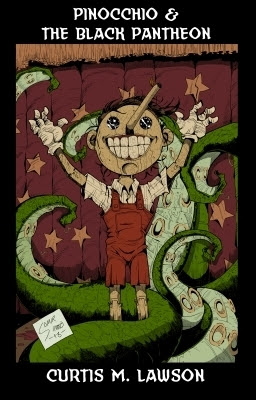 CHHR: What is your favorite horror film?
A Nightmare on Elm St. Nothing else comes close for me. Some of my love for the movie is probably nostalgia, but it honestly still scares me today. The use of unsettling images like Freddy’s arms extending out, or Tina’s bodybag being dragged through the halls of the school are incredibly effective.
As opposed to the later films, Freddy serves as an incredible modern-day bogey man. His design is brilliant. His backstory is developed well enough to sicken the viewer, but not so established as to crush the mystery around him.
On top of that, Nancy is one of my favorite protagonists from any film. Yes, I had a crush on Heather Langenkamp, but it’s more than that. She’s smart, resourceful, and confident. Instead of running around in hysterics she gets angry, devises a plan, and fights back.
CHHR: What type of music do you listen to? What’s your favorite album?
I love a lot of underground music, but mostly metal and punk. My formative years were spent obsessing over Scandinavian black metal, and I steadily played in metal bands from the age of fourteen to twenty-five.
I’m also a fan of old school country western music, 50’s rock n’ roll, psychobilly, and classical music.
As for a favorite album, that’s tough. Probably a tie between Mayhem’s De Mysteriis Dom Sathanas, Samhain’s November Coming Fire, and Guns N’ Roses’ Appetite for Destruction. As for more recent stuff, Our Season Draws Near by 1476 and Plowing Into the Field of Love by Iceage are at the top.
CHHR: What is your spirit animal?
The wolf. I find wolves beautiful and I identify with their social structure. The idea of a close-knit pack appeals to me. There is something comforting in their extended family dynamic, and the loyalty that goes with it.
CHHR: What is your favorite beer?
Believe it or not, I have never drank a beer, aside from tasting my dad’s when I was a little kid. I’ve been straight edge my whole life.
CHHR: If you could have a beer with one author, who would it be?
As I said, I don’t drink, but I might break my rule to have a beer with Neil Gaiman and discuss mythology. 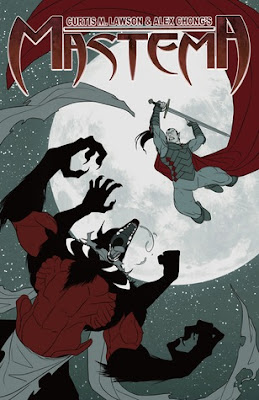