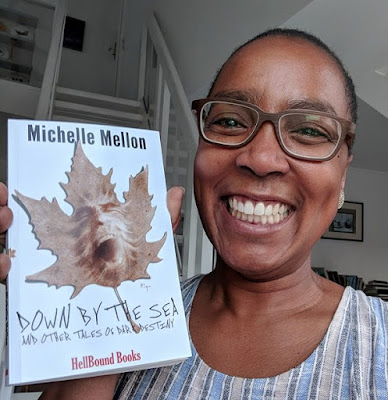 Excerpt from the “The Back Seat” in Down by the Sea and Other Tales of Dark Destiny by Michelle Mellon
She looked down at her hands where they gripped the steering wheel. Tensely, tightly, clinging so hard that the veins stood out like bluish-green strings under her skin.
No, not strings, she thought. Bands. Stretched to the limit and waiting to snap, which would leave her hands hanging limp and useless from the ends of her arms. Right now it all held together in some delicate balance of form and function. But there was something about her hands that set her teeth on edge.
She could feel those islands of enamel in her mouth, also gripping tightly. Incisors, bicuspids, molars pressing against each other in an attempt to merge. She glanced at herself in the rearview mirror, waiting for a grind, a crack, a shift to ease the ache in her jaws.
She focused again on her hands. There was something hideous about them. Not at first sight, although they looked so tiny with the fingers hiding on the other side of the wheel. Like they were truncated, miniature Muppet hands at play. There was something bad about them she couldn’t quite see, but she knew it was there. Waiting, taut and terrible under the surface of her skin. Just like her bluish-green rubber-band veins.
A horn sounded. Then again. And again. Each instance had an exponential effect, bouncing and echoing around in the tunnel. The blaring swelled until she thought she could actually see the sound polluting the air. She wanted to cover her ears, but her hands were glued to the wheel.
The noise crowded out her thoughts and filled her senses until she could hear-touch-taste-smell nothing but the blat caused by hand to horn. She felt nauseous and congested and hoped the pain traveling from her jaw to her temple signaled that it would soon be over. Then she wouldn’t have to live with what she knew and felt but couldn’t seem to remember. Something about what her hideous hands had done.
Suddenly the sound stopped and the tunnel was quiet. And dark. Only a few cars ever obeyed the daytime headlights sign in the tunnel. She was not one of them, and apparently neither were any of her fellow travelers. She tried, but her hands wouldn’t move to flick them on. In the feeble trickle of daylight, however, she could see no movement. After the cacophony of horns, the stillness was unsettling.
Then she thought she heard an echoing thud. Car doors slamming shut in anger, frustration, fear? But no one walked past her car, in front of her car, behind her car. She checked all of her mirrors. No shifting shadows, no shapes peering in windows or trying to make contact.
Hands still gripping the wheel, she turned from side to side. No one. No one outside their car, anxiously pacing the lanes. No one climbing the curb to the emergency phone to report the broken lights. No eerie display of backlit screens as people grappled with cell phones to call about traffic, notify babysitters, or solicit comfort from loved ones. No one sat inside their cars or on top of their cars. No one stood or paced or raged at the inexplicable delay.
There was no one else in the tunnel.
In the silence she continued to sit upright in her seat, hands on the wheel, eyes facing forward. She knew the radio was broken. She knew the glove box was empty. She had no cell phone. She thought she might have a purse, tossed carelessly in the back seat. Perhaps she could find something in there to distract her from whatever it was that was trying to creep into the near-memory corners of her mind. But she could not bring herself to turn around.
She no longer willed her hands away from the wheel. Instead, she was happy to see them rooted there, safe. They were not busy doing bad things. Besides, the car smelled of stale smoke, sweat, and something else. She was sure the something-else smell was coming from the back seat.
She wanted to wake up. She had to be dreaming. Caught up in some slowly building nightmare she didn’t want to see through to the end. She didn’t know this place, did she? Not like this. Not with dripping walls and daytime darkness. She was confused, and incredibly tired. She couldn’t remember where she had come from or where she was going. Why she wasn’t moving. Or why she was alone.
She tried again to focus but her thoughts were fuzzy and disjointed. Her hands reacted with their own will, spasm after spasm, jerking to try to turn the key and kill the ignition.
She shuddered. No, not kill. She didn’t like that word. Stop. Soften. Quiet. Yes...quiet.
Her hands failed in their mission and flopped back to rest on the lower part of the steering wheel. She sat in the darkness with only the rumble of her idling engine accompanying her and the doors locked and the windows up tight. Somehow that seemed wrong and right at the same time, everything okay except for that back-seat-something smell, nagging and poking and prodding at her thoughts.
A small seed of fear appeared somewhere deep inside, took root, and bloomed. She could feel tendrils tickling out along her limbs, pushing up the hairs on her arms. Dark petals forced their way into her throat, suffocating her. She coughed and gagged. Her hands would not obey her command to move and claw at what caught in her throat. She would die here, senselessly sitting alone in this dark endless tunnel.
Posted by Cedar Hollow Horror Reviews at 12:33 PM