THEY FEED by Jason Parent 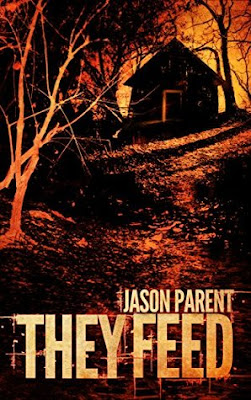 Jason Parent is at the top of his game! I didn't know what to expect going into this book. I know Jason Parent can write, but I didn't know the premise when I opened this book. I couldn't put it down. I love when authors use clever book titles, such as this one. The cover catches your eye and the title intrigues you. I just had to know who "they" were. I was also curious about the cabin at the top of the hill. I love camping and the outdoors.

The night uncovers all we wish not to see.

Tyler has spent the last six years in prison for accidentally killing a boy. He returns to the site of the accident, which is at a campground in Kansas. Tyler is being followed by Dakota, the dead boy's sister. Dakota is out to get revenge, but her plan is thwarted by other campers. The unlikely characters must join forces to face the monstrosities that are surrounding the cabin.

THEY FEED is one of the best creature features I've read in quite some time. Jason Parent explores a few horror tropes in this blood-soaked book. The creatures are smart and horrifically savage–a deadly combination if you ask me.

Jason Parent delivers horrendously disturbing scenes that enhance the reading experience. The characters are well developed and interesting. The author does a great job of exploring their backstories while keeping the storyline nice and tight. The character reveals and connections are one of the best parts of the book.

There is an incompetent authority figure in this book that will make you laugh and yell. I was trying to tell the character to do this and do that, but he just wouldn't listen.

The scenes are brutally vivid. The dialogue feels real. There aren't any loose ends or hiccups dealing with the storyline. The characters are solid and the grotesque monsters are enough to satisfy any horror fan.

I think I'll settle for a tent fort and smores in my living room this summer. After reading this book, I don't want to go near the woods for a while.

Grab some popcorn and a soda because this one reads like a movie! 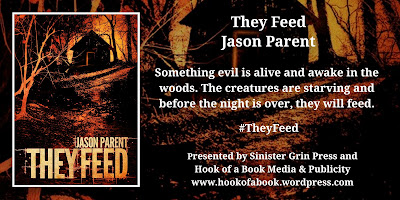 Synopsis:
·   Print Length: 254 pages
·   Publisher: Sinister Grin Press
·   Publication Date: April 15, 2018
The night uncovers all we wish not to see.
A troubled man enters a dusky park before sunset. A young woman follows, hidden in shadow. Both have returned to the park to take back something the past has stolen from them, to make right six long years of suffering, and to find justice or perhaps redemption—or maybe they'll settle for some old-fashioned revenge.
But something evil is alive and awake in those woods, creatures that care nothing for human motivations. They’re driven by their own insatiable need: a ravenous, bottomless hunger.
The campgrounds are full tonight, and the creatures are starving. Before the night is over, they will feed.
An unrelenting tale of terror from Jason Parent, acclaimed author of People of the Sun and What Hides Within. 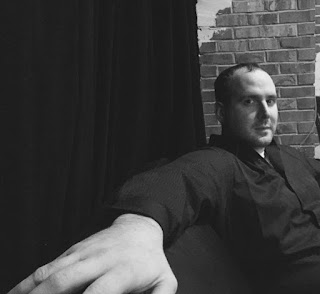 Author Bio:
Jason is an author of horror, thrillers, mysteries, science fiction, and dark humor, though his many novels, novellas, and short stories tend to blur the boundaries between these genres. From his award-winning first horror/mystery novel, What Hides Within, to his widely applauded police procedural/supernatural thriller, Seeing Evil, Jason’s work has won him praise from both critics and fans of diverse genres alike. His work has been compared to that of some of his personal favorite authors, such as Chuck Palahniuk, Jack Ketchum, Tess Gerritsen, and Joe Hill.
Jason grew up near Fall River, Massachusetts, the setting for several of his novels. He has lived in New England most his life, currently residing in Rhode Island.
Praise for Jason Parent:
"Seeing Evil has some very special moments and is a very fast read. There's no denying Parent has talent." - Glenn Rolfe, author of Blood and Rain and Boom Town
"Jason Parent has done it again! He has created a brilliant story that will grip you tight and won't let go! I found myself turning page after page to see what happens next. From start to finish, this book is mind blowing!" - Cedar Hollow Horror Reviews on A Life Removed
"Wonderfully original tales of horror... Wrathbone and Other Stories gets my highest recommendation." - Cemetery Dance
"From the eerie opening tale to the grisly closer, and all of the wonderfully mean-spirited tales in-between, Wrathbone is a winner!" - Jeff Strand, author of Dead Clown Barbecue
Purchase Link
Amazon
For all your other horror, fantasy, or sci-fi needs, check out Sinister Grin Press!
Media/Reviewers
If interested in featuring They Feed or Jason Parent, contact Erin Al-Mehairi, publicist, at hookofabook@hotmail.com.
Posted by Cedar Hollow Horror Reviews at 4:25 PM