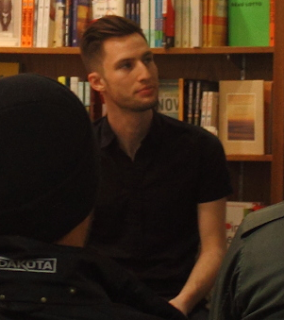 CHHR: When did you realize you wanted to be a writer?
MT: I’ve been writing stories for as long as I can remember. My ambitions have changed a lot throughout my life, but I remember saying as early as grade three that I wanted to be a writer. I finished my first novel when I was about nine or ten. It was a very bad, very shameless rip-off of J.R.R. Tolkien and George Lucas.
CHHR: What does your writing schedule look like?
MT: I’m still figuring that out. When I’m working on a novel, I prefer to write at least 1000 words a day, depending on my day job’s busyness. These days, I usually write for about an hour in the evenings. If I could stay home in the mornings, I would prefer writing before noon; but since I work weekdays, post-dinner sessions will do for now. I take weekends off.
CHHR: Do you have any interesting writing quirks? If so, what are they?
MT: I wish I could honestly say “yes,” that I like to flay myself while blaring recordings of Gregorian chants, or that I drink Sunny D from the mouth of a human skull between paragraphs or something. But the truth is that nothing exciting comes to mind—I usually play music on my headphones (something really heavy or really soft, depending on the project), sit at my desk and tap away on my laptop.
CHHR: Do you like writing short stories or novels?
MT: I enjoy both processes for different reasons. As an adult, I’ve only completed one full-length novel, and I found the editing process extremely long and laborious. For my next novel, I think I’ll go in with a clearer sense of direction from the outset. When it comes to short fiction, there’s less risk in my usual M.O., which is generally to improvise and follow my instincts and then go about the more surgical re-structuring after the first draft is complete.
CHHR: How is the horror scene where you live?
MT: In terms of horror writers who live in Calgary, I can think of a couple off the top of my head: Sarah L. Johnson, who wrote Suicide Stitch and a story in Unnerving’s recent Hardened Hearts anthology, and Craig DiLouie (I think he still lives here, anyway). I really love the Night Terrors Film Society, which is a small group that runs local horror film screenings.
CHHR: Do you use outlines or do you go with the flow?
MT: I always go in with some sense of direction, but I’ve never outlined anything. For me, it feels natural to go with the flow, but I think that will change when I start writing my next novel.
CHHR: How did publishing your first book or short story change your writing process?
MT: Creepy Campfires (for Grownups) was my first paid publication—they bought a story called “Long Man.” That piece had a much different structure and focus in its initial form, as an excerpt of an abandoned larger project. When I first wrote the piece, the title creature was a kind of foil for the narrator, a ghost undergoing a murder investigation. The anthology’s editor took a strong interest in the Long Man character, and wanted me to write something that more clearly depicted his backstory. So, in a very direct way, my first story publication encouraged me to rethink my process.
CHHR: What do you think makes a good horror story?
MT: My favorite horror stories usually seem to have a sense of real respect for the genre. Otherwise, I would say a good horror story requires the same ingredients as any good story—distinct voice, sincerity, intelligence and an author’s personal perspective.
CHHR: What are you currently working on?
MT: I’m doing early research for a novel, and I’m about midway through a new short story that seems suspiciously non-genre to me.

CHHR: What is in your TBR pile?
MT: Too many books to name! I’m currently reading Stephen King’s Just After Sunset and René Descartes’ Meditations on First Philosophy. In terms of horror fiction, some of the titles I would like to get to this year are Kristi DeMeester’s Everything That’s Underneath, Tananarive Due’s My Soul to Keep, Gwendolyn Kiste’s Pretty Marys All in a Row, Tiffany Scandal’s There’s No Happy Ending, S.P. Miskowski’s Knock Knock, John C. Foster’s Dead Men and Paul Michael Anderson’s Bones Are Made to be Broken… but the list is endless, honestly. I want to read everything! There are so many wonderful books being published in the horror genre alone, but I like to read a wide variety of fiction and nonfiction.

CHHR: What is the last book that scared you?
MT: Last year I read Jeffrey S. Victor’s Satanic Panic, which was a pretty disturbing social-psychological study of rumor panics. It’s all about the systematic exploitation of ignorance and fear, which we can currently see playing out in contemporary political contexts (consider the election of a fearmongering idiot like Donald Trump as one obvious example).
CHHR: What is your spirit animal?
MT: I’ve always loved rabbits, but I wouldn’t call them my spirit animal because the term has such a culturally specific meaning.
CHHR: What is your favorite beer?
MT: As long as it’s dark and/or hoppy, I’m usually happy, but I don’t drink very often.

CHHR: If you could have a beer with one author, who would it be? 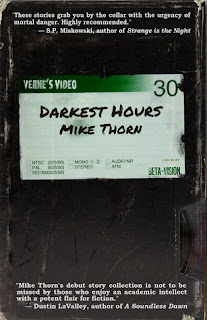 Synopsis:
In the bleak landscape of Darkest Hours, people make decisions that lead them into extreme scenarios – sometimes bizarre, often horrific, always unexpected. Between this book’s covers you will find academics in distress; monsters abused by people; people terrorized by demons; ghostly reminiscences; resurrected trauma; and occult filmmaking. Ranging from satirical to dreadful, these stories share a distinct voice: urgent, sardonic, brutal, but always empathetic.
Praise for Darkest Hours:"In these sharply compelling stories Mike Thorn intertwines the bizarre and the quotidian to form seamless chronicles of personal disaster. The protagonist may not know the precise nature of the catastrophe heading his way, but you get the feeling he's been anticipating something bad—and inexorable—for a long time. This rueful wisdom, a product of youthful disappointment and early trauma, informs each tale as it winds its way toward a natural yet surprising conclusion. The element of surprise is a tribute to Thorn's ingenuity; the assuredness of his prose is due to his extensive knowledge of the horror genre. Perfectly paced from the first sentence, these stories grab you by the collar with the urgency of mortal danger. Highly recommended." -- S.P. Miskowski, author of Strange is the Night"Everyone has their own mythology. Most people, however, don’t recognize it as such. Mike Thorn gets it. His fiction seems to blur distinctions between horror and noir, between science fiction and fantasy. Between dream and reality. They’re all here. Demons. Monsters. Big ones, little ones. (Sometimes the things done to them are worse than the things they do.) When you first encounter Thorn’s writing, a number of qualities impress themselves: the macabre intelligence (brutal really), the chilling wit, the naturalness of the dialogue. Plus there’s the skill and style of the prose. It may all play out like a nightmare, but a terrible logic remains inherent. His characters make bad choices, and it’s those decisions that bring on calamity. At once, the reader recognizes this. Mike Thorn is inescapable, and he understands that most terrifying variety of monsters, the hidden ones, the inner ones. They’re on display here. Savor the experience." -- Robert Dunbar, author of The Pines and Willy"Darkest Hours is for readers wishing to take a thrilling walk on the dark side. Mike Thorn has delivered a promising debut with this collection showing off his commitment to stories of nuance, heart, and of course… darkness." -- Daniel Braum, author of The Night Marchers and Other Strange Tales"I've long been a fan of authors who can create a style and allow it to be as important as the story itself. Mike Thorn is a prime example of an author who builds off the baseline mechanics of prose on his own terms, and in the process writes witty and honest, dark literary stories, as is the case with Darkest Hours. Mike Thorn's debut story collection is not to be missed by those who enjoy an academic intellect with a potent flair for fiction." -- Dustin LaValley, author of A Soundless Dawn"Fast, fun and full of fear, Darkest Hours turns on a dime from a laugh to a scream. Terrifying and sly, Mike Thorn writes with refreshing originality and hides fangs behind a smile." -- John C. Foster, author of Mister White 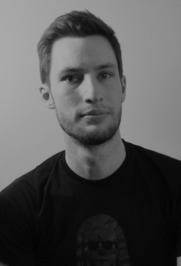 Bio:
Mike Thorn resides in Canada. Mike is the author of the short story collection Darkest Hours. His fiction has appeared in a number of magazines and anthologies, including Dark Moon Digest, Behind the Mask - Tales from the Id and Straylight Literary Arts Magazine. His criticism has been featured recently in MUBI Notebook and The Film Stage, and he co-authors the horror-themed series "Devious Dialogues" with A.M. Stanley for Vague Visages.
Posted by Cedar Hollow Horror Reviews at 11:39 AM