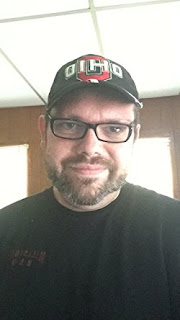 BJS: Hemingway because he always wrote with passion and he always had a way with his characters. If I had a roundtable of authors I’d like to have a beer with, I’d have to say Hemingway, Poe and Ketchum so that I can pick their brains.
Author Bio:
Brian J. Smith is the author of numerous short stories featured in numerous e-zines, magazines and anthologies in both the horror and mystery genres. He currently resides in Chauncey, Ohio with his brother and four dogs where he cooks the hottest food known to man, doesn't own enough books, watches Ohio State football. He can be found on Instagram under buckeyefan37 and on Twitter under BrianJSmith913.
Posted by Cedar Hollow Horror Reviews at 5:57 PM