Today I have a fairly new author visiting Cedar Hollow. His name is Kevin Holton and he's sharing a book excerpt. The excerpt is from his latest release published by Severed Press: 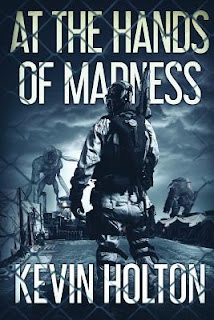 There were at least a hundred, and only a half mile off. Given their speed, I’d be able to kill maybe twenty. Thirty if I pushed it, but then I risked missing.
I took aim. Bang! Bang! Some stumbled over fallen bodies, but this didn’t help much. Our foot units charged forward, no doubt hoping to stem the tide with their meager weapons. One was immediately eviscerated, left to hold his organs in with his hands as he choked on his own blood. Bang! Miss. Bang! Kill.
Another three rounds, two misses, Fuck! A boy who couldn’t have been older than seventeen was lifted into the air, the Phranna holding him biting a chunk out of his side. I killed it, but not before it killed him. A girl—his girlfriend?—screamed and rushed to his side, only to have her head sliced off on the way, her body stumbling, taking a few steps without her, then collapsing at his side.
We didn’t have many, and we were losing more than we could afford, and it was my fault because I missed three times already, three god damn times! Five rounds, one miss, loaded in a new cartridge, they were only a third of a mile out, Fuck, fuck! Two rounds, two misses. An older man was punched in the skull so hard I could hear the bone break from a football field away, the attacking Phranna looming over him, quartering him, leaving him limbless and screaming, red drenching the cracked brown earth. I didn’t know if my next round should be in the Phranna’s heart or his, but this was life now, this was war in the time of Medraka, where every move was a panicked, split-second decision between vengeance and mercy. My hands shook, cold sweat slick along my grip as I raised my gun, trying not to hear him, trying not to consider his pain and fear, trying to let this be a moment of centered rationality. My gun had never been so heavy, nor my heart so loud.
Heavy stomping echoed through the area, and I almost shit myself as my heart stopped. Medraka? I thought, looking around, not wanting to scream and cause a panic, but no, it wasn’t the kaiju. A fifteen-foot-tall mech strode onto the battlefield, waving an arm, giving the signal for me to stand down. It was paneled with unadorned steel, no paint or markings, no insignias or war signs. Damien’s latest creation had weaponry built into every limb and joint; I could see enough guns for an army, and there were certainly more hidden in its guts. This had been built to destroy indiscriminately, a sentinel whose presence said, Let all those who oppose me perish.
I obeyed, lowering my gun, and with one sweep, it unleashed a concentrated red blast from its eyes, cutting through at least twenty of them.
The rest skittered to a stop.
Raising its arms, the sentinel took arm with wrist-mounted, high caliber guns, each firing one round per second, never once missing. Huge bullets tore the remaining horde to pieces, splattering misshapen organs along the field. The forty or so it had within its sights didn’t survive the first minute of its attack.
Right—this was why Damien served as our leader. In times like this, you don’t defer to the person with the best managerial skills. When life is about survival, you follow whoever has the most power, and so long as there were two pieces of metal to weld together, Damien would carve a swath through the Phranna that made The Harrowing of Hell look like Sunday brunch.
Grover and Allessandra were pretty powerful too, but their power was biological. It had limits. If they were tired, hungry, sick, wounded, whatever, then they wouldn’t be able to fight at full capacity. Damien could set his ‘skills’ to autopilot and destroy an army with his eyes closed.
The sentinel, as I’d decided to call it, looked over the battlefield, satisfied, then walked toward the southern fields. I scampered down from my perch to attend to the limbless man, who wasn’t too far, but just far enough that, if our medics hadn’t been paying attention, they might not have noticed him.
By the time I got there, he died. He’d bled out, or gone into shock, or something. I don’t know, I’m not a healer. I’m a sniper. That had always been my job: to take a step back, take a breath, and execute. Before Medraka, every coworker at every job I held knew me by that role, as the decision maker, the one who could come in at any conflict and find the best decision for the whole staff. Here, on the blood-drenched soil of yet another battle against the Phranna, all I could do was reach over and shut his eyes. It wasn’t much, but in a situation like this, it had to be enough. 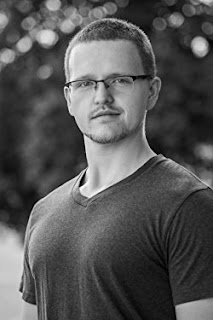 Author Bio:
Kevin Holton is a cyborg and coffee addict living in coastal New Jersey, usually found writing sci-fi and horror.His upcoming novels, The Nightmare King (Siren's Call Publications); At the Hands of Madness (Severed Press); and These Walls Don't Talk, They Scream (HellBound Books) are all aimed for a 2018 release. He also cowrote the short film Human Report 85616 alongside Kevin North Ruiz.When not reading and writing, he can be found talking about Batman, narrating audiobooks, or recharging in a dark room somewhere.
Posted by Cedar Hollow Horror Reviews at 4:15 PM