Fury of the Orcas by Hunter Shea 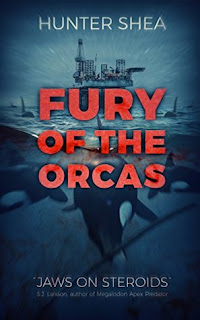 Hunter Shea gets things going right off the bat! It's just Hunter Shea doing Hunter Shea things! Hunter Shea is The Cryptid King. He does creature features better than anyone I know. This time around, Hunter Shea takes on orcas/killer whales.

They call them the wolves of the sea.

Killer whales are going mad. Orcas are wreaking havoc across the world. Held in captivity at marine parks and aquariums, killer whales jump out of the water and rip their trainers to pieces. What caused the orcas to go berserk?

Everyone is depending on Chet Clarke to come through in the clutch. Chet Clarke is an orca trainer who has dedicated his life to preserving the health and dignity of orcas in captivity. Chet teams up with Rosario to find answers. Their race against the clock will lead them across the globe. They witness more carnage along the way.

Fury of the Orcas is action-packed. The scenes jump off the page. It reads like a movie. It has the gore, the romance, and the dilemma. I like how he tied in previous books too. The helicopter scene is everything. It reminded me of Jaws 2, but way better. Hunter Shea begins hinting at a conspiracy theory. To me, this makes the story better. The characters are believable and I could easily relate to them. Hopefully, there will be more books starring the orca trainers. 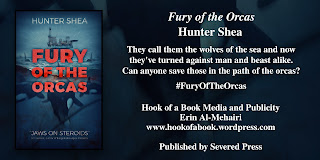 Synopsis:
·       File Size: 2713 KB
·       Print Length: 150 pages
·       Publisher: Severed Press
·       Publication Date: December 6, 2017
They call them the wolves of the sea.
From marine parks to the deepest oceans, the world’s killer whale population has turned against man and beast alike. Orca show trainers are ripped to pieces before stunned audiences. Ships are capsized. Oil rigs are bashed without mercy. What has driven the apex predators stark raving mad?
Chet Clarke has dedicated his life to preserving the health and dignity of orcas in captivity. Along with orca trainer Rosario Benitez, he embarks on a whirlwind journey across the globe to witness unconscionable carnage and uncover the mystery for the sudden outbreak of mania. Is this the start of a catastrophic pandemic? Or do the clues lead to an enigmatic experiment in the wilds of Alaska and shadow operations in a Russian ghost town? Time is running out faster than the lives of those in the path of the orcas.
Hunter Shea, Biography
Hunter Shea is the product of a childhood weaned on The Night Stalker, The Twilight Zone and In Search Of. He doesn’t just write about the paranormal – he actively seeks out the things that scare the hell out of people and experiences them for himself.
Publishers Weekly named The Montauk Monster one of the best reads of the summer in 2014, and his follow up novel, Hell Hole, was named best horror novel of the year on several prestigious horror sites. Cemetery Dance had this to say about his apocalyptic thriller, Tortures of the Damned – “A terrifying read that left me wanting more. I absolutely devoured this book!”
Hunter is an amateur cryptozoologist, having written wild, fictional tales about Bigfoot, The Montauk Monster, The Dover Demon and many new creatures to come. Copies of his books, The Montauk Monster and The Dover Demon, are currently on display in the International Cryptozoology Museum in Portland, ME.
He wrote his first novel with the express desire to work only with editor Don D’Auria at Dorchester (Leisure Horror). He submitted his novel to Don and only Don, unagented, placed on the slush pile. He is proof that dedicated writers can be rescued from no man’s land. He now works with Don, along with several other agents and publishers, having published over ten books in just four years.
Hunter is proud to be be one half of the Monster Men video podcast, along with his partner in crime, Jack Campisi. It is one of the most watched horror video podcasts in the world. Monster Men is a light-hearted approach to dark subjects. Hunter and Jack explore real life hauntings, monsters, movies, books and everything under the horror sun. They often interview authors, crytid and ghost hunters, directors and anyone else living in the horror lane.
Living with his wonderful family and two cats, he’s happy to be close enough to New York City to get Gray’s Papaya hot dogs when the craving hits. His daughters have also gotten the horror bug, assisting him with research, story ideas and illustrations that can be seen in magazines such as Dark Dossier.
You can follow his travails at http://www.huntershea.com, sign-up for his newsletter, or follow him on Facebook and Twitter.
Praise for Hunter Shea
“Loch Ness Revenge is not only monsterific, but it's also comedic.” – Tim Meyer, author of Worlds Between My Teeth
“Shea delivers a tense and intriguing work of escalating tension splattered with a clever, extensive cast of bystanders turned victims…An otherwise excellent, tightly delivered plot…Fans of cryptid creatures are likely to revel in this love letter to a legendary menace.”– Publishers Weekly
“Bloody good read!  This guy knows his monsters!”- Eric S Brown, author of Bigfoot War and Boggy Creek: The Legend is True, on Swamp Monster Massacre
“Hunter Shea is a great writer, highly entertaining, and definitely in the upper echelon in the current horror scene. Many other writers mention either loving his work and/or having the man influence their own, and for just cause. His writing suits anyone with a taste for the dark and terrifying!” –Zakk at The Eyes of Madness/The Mouth of Madness Podcast
Posted by Cedar Hollow Horror Reviews at 12:40 PM