The Betrayed by Wesley Southard 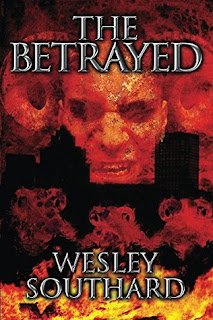 The Betrayed is Wesley Southard's first novel. With that being said, it was better than most first novels.

Sydney Jameson is being followed by people who wear brown robes, and they are gaining on him. They need to tell him something about his past and something that he didn't want to know about his future.

Wesley Southard puts a twist on the war between Heaven and Hell. Who is the real bad guy? Lucifer or Gabriel? Sydney Jameson will soon find out his place in the battle of good vs. evil. Only he can stop the battle once and for all, but the rest of the world wants to stop him.

I enjoyed the twist on the war between Heaven and Hell. I was invested in Sydney and the other characters in the book. The scenes jumped off the page. The writing style is good. The story is fast-paced and kept me interested.

This is my first time reading Wesley Southard, but it won't be my last!

Get a copy here! 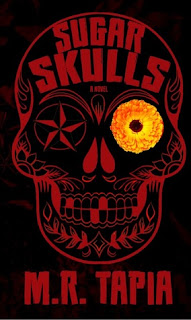 M. R. Tapia keeps delivering the goods! I wasn't sure about this book at first because I didn't know what a sugar skull was. Of course, I did my research. M. R. Tapia allows the reader to delve into other cultures. So far, I have learned about Japanese and Mexican culture through three of his stories.

Micah DeAtta wakes up to find himself seated across from Death. Micah doesn't know what is going on, so he converses with Death to see what has happened and why he is sitting across from Death. The exchanges become entertaining, which enhances the story a bit. Death nicknames him Meeks. I thought that it was funny because Death is being so personal to Micah like they have been friends awhile.

Micah is forced to relive the deaths of his family and friends before he learns about his own. The deaths occur in real time, and each death correlates with the nine levels of the Aztec underworld. He learns that he did not live up to his full potential. In fact, he regrets several things about his life. He learns that life is far too short and that death is forever.

The scenes in this book are vivid. The characters are relatable, and the dialogue is great. Each chapter ends with a line or two that makes you want to keep reading deep into the night. I would have finished this book in one sitting if life hadn't interfered with my reading. It is a great book filled with characters that you won't soon forget. I enjoyed the writing style as well. If you enjoyed The Die-Fi Experiment, then you will enjoy Sugar Skulls. 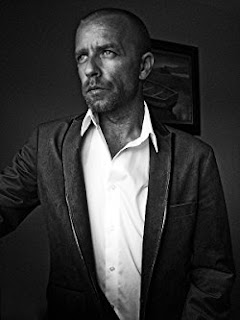 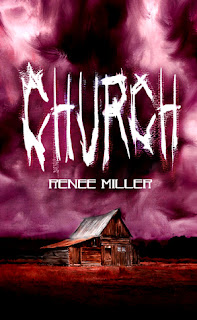 Renee Miller has created a tale to terrify all who dare to read it! I have read and watched movies about cults, but Renee Miller takes it to the next level.

Ray is a devoted Christian who has fallen in love with a woman who follows a god called Zabir. He wants to save her from eternal damnation, so he goes and joins her church. Ray is in for an immediate shock. The Zabian way is a transformative process that is both physical and mental. Not only is Ray broken physically, but he is also broken mentally. Ray's mind is shattered and he loses his identity. Ray loses all hope. The woman he loves dies while he is undergoing his spiritual transformation.

The cover is badass, so I decided to read this one. I've never read Renee Miller before, so I didn't know what to expect going into the story. I was hooked immediately. The author wastes no time delving into the thick of things. I was intrigued with the profit and the way he ran things at his church. The characters are memorable–they seem real. The story-line is smooth and the ending was epic! I didn't see that ending coming! Church packs a punch right to the gut. The book is a psychedelic trip inside the inner workings of a modern-day cult.

Church is easily one of my favorite books of 2017! Everyone should read this one!

The Veins by Matthew J. Leverton 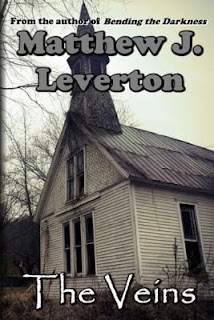 The Veins is a solid read! Remember the name Matthew Leverton, people!

The town of Red Rock has a dark past. A Nephilim wreaked havoc on the small town in the 1940s. People are preparing to reopen the church on Griffin Street. A young preacher moves into town to pastor the church. People begin to die. It becomes a who done it. The authorities are trying to catch the serial killer, but they have no leads. It appears as though the people are committing suicide. Has Red Rocks' dark past returned?

It took me a few pages to get hooked, but it was worth it! The Veins is filled with several characters. The author knows how to tell a small town story! I was invested in a few of the characters. The small town problems were great filler as well, especially the cheating wife. There is tons of bloodshed and good dialogue. If you like classic horror, then you will surely dig this book. There are Christian overtones, but that doesn't take away from the story.
I was hoping for more of the supernatural in this book. Overall, I enjoyed it!

They Came With The Snow by Christopher Coleman 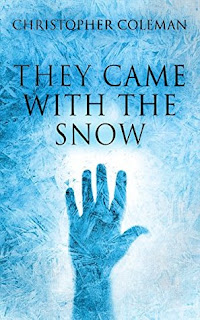 A blast goes off in a small college town triggering a blizzard in May. The story is told from Dominic's POV and you get to see the aftermath of the explosion and what follows. You get to see how guilty he feels for surviving. The crab things that came with the snow are almost undetectable save for their black eyes peering out through the snow drifts. I didn't find them scary or creepy.

They Came With The Snow is an okay read. I enjoyed the writing. I enjoyed the storyline, but I think it should have been a book instead of a short story/ novelette. The event calls for a longer storyline.

Horror stories have to have some sort of tension, but this story didn't have any. I didn't feel unease while reading this either. 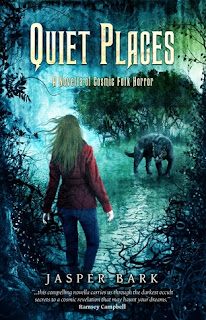 Sally moves to Dunballan to be with David. She cares for the people there who are comatose, slowly dying. Quiet Places starts off at the ending, and then you get filled in on what happened in Dunballan.

Since moving to Dunballan, David starts to change. Sally senses things are not quite right, so she goes digging for answers. She discovers the curse of David's family. The past is told through old journal entries. Jasper Bark takes us deeper and deeper into the past looking for answers to what happened in Dunballan.

I was hooked from the first page. The initial event was cool because it catches your interest, and then you want or have to know what happened. Jasper Bark makes you think about his stories long after you read them, and Quiet Places is no exception. I'm really digging the mythos in this book. I will also read the other two books in this mythos series.

Quiet Places touches on several horror tropes. I like the way the story is told and I think you will too. I was fully invested in Sally. She is very relatable. The story unfolds smoothly and it kept me up late reading by lamplight.

You can get your copy here!


Posted by Cedar Hollow Horror Reviews at 3:45 PM No comments: 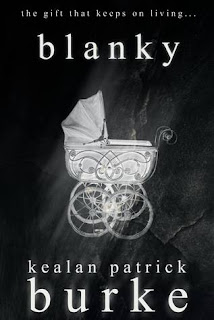 Kealan Patrick Burke delivers again and again. Blanky is another story that delivers all the thrills and chills. I didn't know what to expect from Blanky, but I knew Kealan Patrick Burke crafted a terrifying tale because everything he writes scares the hell out of me.
Steve Brannigan has been struggling after his infant daughter's horrible death. His wife has left him, and she refuses to enter their home. Steve isn't able to work, so he tries to drink the pain away while he watches old TV shows. Steve hears something in his daughter's room. He looks around, but all he could find was an old blanky with rabbits on it. The blanky was purchased from a weird old man at an antique place selling "BABY CLOSE." That is when all hell breaks loose and things start spiraling out of control for Steve. He is grasping to hold on to the little bit of light that remains in his life, but Steve's darkest days are in front of him.
Blanky is one helluva trip! I was fully invested in Steve and what he was going through. I was also wanting to know more about the old blanky. The story unfolds perfectly and just enough is revealed to keep the reader guessing right up until the very end. There are no loose ends, just an epic take on grieving and what happens to those who are in the process of mourning the loss of a loved one. Blanky is part supernatural and part psychological. A damn fine read, people!
This book will leave you thinking long after you have turned the last page. The cover is badass as well!
You can get a copy here!
I highly recommend this book to fans of horror!
5/5 stars!
Posted by Cedar Hollow Horror Reviews at 3:48 PM No comments: 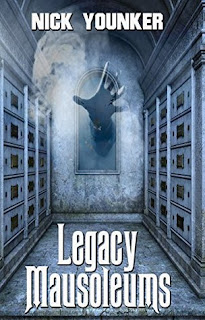 Nick Younker delivers the goods! Duncan Criss is a writer. He reports stories that are deemed too crazy to be true. He writes on his online news site, but he can't make enough money to live on. So, he takes on a second job at Legacy Mausoleums. He is hired on as the night security guard. He begins to see things. He gets closer and closer to the biggest news story of all time. Can he survive long enough to publish the article on his website?

Legacy Mausoleums is a creepy short tale full of dread and ghosts. Mausoleums creep me out! I had to turn the light on halfway through this story. The story flows well and the characters are not shallow. Nick Younker does a great job of giving you just enough background to make the characters come to life. I didn't see the ending coming at all! The ending was good, but it could have been better.

This is my first time reading Nick Younker, but it won't be the last!

You can grab a copy here.

I recommend this short story to fans of horror!