The Damned by Tarn Richardson 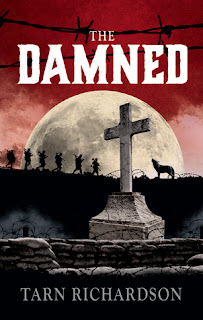 The Damned is a hell of a read! The cover is badass! I love history, especially military history. The Damned is the Great War with werewolves. Tarn Richardson did a hell of a job researching the time period. It's interwoven with occult and supernatural horror. The book is written in the present (early 20th century) and has flashbacks from the late 19th century. The story spans most of Europe.

Poland 1889: Poldek Tacit's parents are brutally murdered, but he is spared. Father Adansoni takes the boy to Vatican City because he thinks Tacit was saved by a divine power.

Arras 1914: Lieutenant Henry Frost fights the Germans, but the Germans are attacked and massacred by an unknown enemy.

Father Andreas is murdered and Poldek Tacit is sent by the church to investigate.

The characters are vast and unique. The story felt real and the characters felt real. The story is very detailed, but it doesn't drag or lag. The Damned is filled with death, sex, werewolves, war, and religion. It is fast-paced and you can feel the dread oozing from the pages.

I can't wait to read the next book in the series! This is my first time reading Tarn Richardson's work, but it won't be my last.

You can get a copy here.