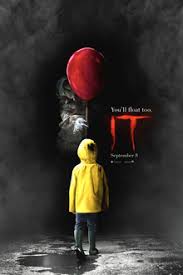 As I waited to enter the theater to watch IT (2017), people were walking out crying. I was pumped up for this movie. I've been waiting for IT to drop for some time, and I was not disappointed. However, I was not fully satisfied either. Was IT great? Hell yeah! I also think the 1990 TV movie was great, yet flawed. Is the book better than both versions? You bet!

Don't get me wrong, IT was badass. I just feel like some of the big scares were in the movie trailers. There were some cool parts that made me jump throughout the movie, though. I wanted the original monsters to return in this movie, but they didn't. There were several zombie-like scenes that weren't that scary.

The actor playing Pennywise the Dancing Clown did a fantastic job. He gives Tim Curry a run for his money. When he twists and contorts it is scary as hell. I didn't like the shark-like teeth very much. The CGI could have been better in some scenes, too.

It was hard to relate to the Losers' Club in this one, and I grew up in that era. The kid actors did a great job of portraying those iconic characters. It's just that I grew up with the original Losers' Club actors. I guess zombies scare all of the kids in this one. I wanted to see the werewolf and others, but it was just zombies. Don't get me wrong, there were nods to these creatures, but it wasn't the same to me. There's plenty of Easter eggs in this film too!

What's more, the book is better than both films. I say that with confidence. Both films have some great things in them. This movie has things that the 1990 TV movie didn't and vice versa. I will definitely buy it when it hits Blu-ray!

Pennywise is scary as hell, especially this version. The actor went above and beyond. The Losers' Club actors all did great jobs! I can't believe people actually think this movie is a rip-off of Stranger Things. Hell, we wouldn't even be talking about Stranger Things if it wasn't for Stephen King's IT. Stephen King is pop-culture. Most horror is inspired by Stephen King, like Stranger Things. Anyways, I loved the movie and I will probably go see it again in theaters.

I highly recommend this movie to fans of Stephen King and horror!