The Separation of Pleasures
In another life, I was a musician. I did a classical music degree (last century), played bass in a band that toured Europe and beyond (this century). I’ve played festivals to more than 150,000 people, and church halls to a handful of grey-haired grannies and their unwittingly caustic wit: “You’re good, dear. You should do this more often.” I’ve played under bridges, on boats, and busses. On radio, TV, and ‘streamed’. Music has always been a big part of my life. Except when it comes to writing or reading.
I may be unusual in this. I know many people who listen to music while they read. Many writers listen to music while they write. I can’t do it.
I’ve tried listening to grunge while writing fight scenes. I listened to epic film scores: Baz Luhrmann’s Romeo & Juliet (Volume Two), Gladiator, The Matrix (even the sequels), and Star Wars spring to mind. I experimented with classical: Elgar’s Cello Concerto, Shostakovitch Five, The Rite of Spring. I even tried listening to The Ramones in order to ‘channel’ Stephen King into my drafts.
It doesn’t work. I get distracted. My grammar and plot slide into the sewer, and my spelling takes a holiday. Ideas that sound awesome in my head when framed by so much of the great music around, come across as flaccid and cheesy by the cold, silent light of day.
Editing is different. I can listen to music while doing that. I’m not sure why there’s a difference. I guess it’s my version of the famous quote ‘write drunk, edit sober’ - write quiet, edit loud. Formatting and uploading books are also different. They need music, the more combative the better, as these two processes can be tedious at best. But writing? So far, it hasn’t worked for me.
So what do I listen to when I do listen to music? As with my reading tastes, it varies. I’ve played a lot of music that hits you in the hips, e.g. Chess Records, Motown, Stax, and James Brown. Recently, I’ve spent a ton of time listening to anything that comes out of Seattle (time when I should have been writing, not wishing I was Dave Grohl). Me’shell Ndegeocello does a good line in mid-90s angry funk. Tim Minchin’s satirical piano songs are superb, both musically and lyrically. (I met him recently and embarrassed myself in front of him, but that’s another story.) Vulfpeck have got the groove, and you can never go wrong with Skunk Anansie.
As you can see, my musical tastes are eclectic, but not extreme. There aren’t any ‘noodle-y’ jazz tunes, no guitar-heroes slavering (I considered using another word here, but thought I’d keep the blog under-18 friendly) over their fretboards, and no hard-core singers screaming their intestines through their throats.
It’s how I like my books: edgy, dark, and varied. Not gory for the sake of it. No profanity just to sound cool. No verbose wordplay to be clever.
But what do you read? Names - give me names!
Stephen King, Neil Gaiman and Joe Abercrombie knock around my top three fairly regularly. (The latter is currently ‘the man’.) They may be predictable choices, but there’s a very good reason why those authors are high up on so many people’s lists. Other writers I’ve recently read and enjoyed (as opposed to those who made me want to drown my kindle, but who shall not be named), include Margaret Atwood, Mark Cassell, Jason Parent, Joss Sheldon, Karl Drinkwater, various authors in Tales from the Lake Vol. 1, and JK Rowling. (Yes, THE JK Rowling, the one who wrote those books about the boy wizard. She tells a great story, and I can’t wait to read them to my kids. Unless I choose to start them off on American Gods ;-).)
I still play. I’m doing local rather than international gigs and being able to walk to a gig rather than take a plane is a luxury. I still write. I still read. I still listen. I just don’t do them altogether.
I need to keep my pleasures separate.

How about you? Can you read or write to music? If so, what music? 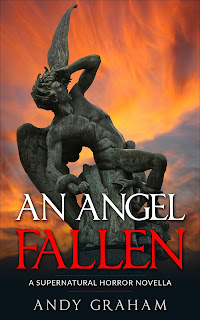 An Angel Fallen
Andy Graham
May 2017
22K words
book blur
You’re eighteen. Bored. Dad’s away a lot. Says its business, but you’ve seen the lipstick stains. Mum’s home. Too much. Keeping the world gin market afloat on her own. There’s Ariel, the family maid. She’s cool. The one piece of this messed up world that makes sense. And then there’s Raph.
Raph’s the leader of your gang of two. He gets off on doing those things to the animals you both catch: the slicing, crushing, and maiming. Buried a few alive, too. His relationship with that hammer of his is sick.
You run with Raph because, well, nothing else to do out here, right? Except if your folks found out what you’ve been up to, there’d be hell.
Then you find it. Whatever it is.
It can’t be what you think it is. Those things don’t exist. But it’s staring at you. Asking for help. Is it dying? Can these things die? You need to do something for it. Raph wants to do something to it.
Time to choose. Do you run with the human devil you know, or take a chance on this thing that fell from the heavens?
An Angel Fallen is a tale of divine retribution from British author Andy Graham. On a day when the world is struggling to stay sane, and is being ravaged by biblical plagues, what price will two teenagers pay for their past? 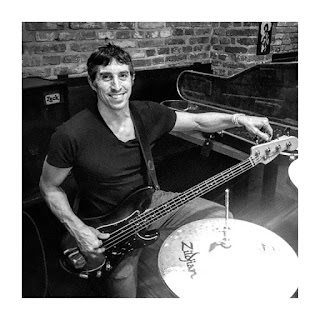 Andy Graham Author Bio (June 2017)
Andy Graham is a British author currently living in the Czech Republic who will now stop talking about himself in the third person because it's odd. I have two main collections of books: The Lords of Misrule is a series of dystopian political thrillers set in an alternate world based on life in 21st century EU/ US. I also have an expanding collection of creepy reads that explore the darker side of life, death, and the undead. There are a few unfinished stories rattling around in my hard-drive and some unstarted ones knocking around in my head. They range from disposable airport fiction and YA sci fi to grimdark epics, but they will have to wait their turn. (Unfortunately for my wife, who is waiting for me to write something 'nice', preferably with sparkly vampires.) Outside of reading and writing, I'm a musician, qualified osteopath, seasoned insomniac, and father to two young kids who have too much energy to let me grow old gracefully.
You can find me online at www.andygrahamauthor.com (where you can claim a free book), twitter - @andygraham2001 and FB - andy graham author.
Posted by Cedar Hollow Horror Reviews at 9:42 PM