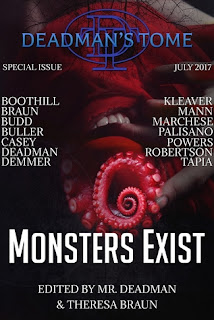 This is such a great anthology about monsters of all shapes and sizes. This book holds monsters that we all have feared since our childhood. It is the things that go bump in the night. It is the stories we tell around campfires. They are the urban legends and the tall tales.

Let me be straight forward with you now. I have never read any of these authors before. Now that I have, I will definitely be reading their other work. Each author brought something to the table. I thought the editors did a great job of ordering the stories as well. There was not a bad story in this anthology! With that being said, let's get to the stories.

The anthology gets off to a strong start with Master Vermin by Wallace Boothill. This story is about rats taking over Baltimore. Think the bubonic plague with a twist! It is a great story!
5/5 rabid vermin!

Legend Trippers by Theresa Braun is amazing! Ever wonder why there is never any proof of urban legends? Read this story and you will know why! The story is about a Goatman. Great story!
5/5 horns!

The Murder of Crows by S.J. Budd is crazy cool! A mysterious lady gets into a serial killers cab. He tries to kill her, but he can't. Turns out he owes her a debt! I will never look at crows the same way again!
5/5 crows!

Wicked Congregation by Gary Buller is terrifying! This is about sacrifice and fairies. This story is told as a confession or a recounting of events. I have wanted to visit England for a while now, but I might hold off due to the fairies that reside there. Great story!
5/5 wicked fairies!

Playing Dead by S.E. Casey is amazing! Who doesn't like a circus that pops up overnight in your town? I don't know what it is about them, but you just have to check them out. Am I right? The story is set in New Hampshire at a circus. This story deals with loss, nightmares, and depression. Great story! Didn't see that ending coming!
5/5 devil monkeys!

Never Sleep Again by Calvin Demmer is creepy! There is a serial killer on the loose. The serial killer has killed 4 people. The only thing left behind is dirt under the victims' beds. This story will make you want to leap from your bed. You never know what might be under your bed! Great story!
5/5 sleepless nights!

The Voice from the Bottom of the Well by Philip W. Kleaver is mind blowing! Johanna hears a voice at the bottom of an old well near her house in Massachusetts. The thing at the bottom of the well is hungry. Johanna must feed it, and boy did she! Awesome story!
5/5 creepy wells!

Eclipse of Wolfcreek by Sylvia Mann is eerie! I have heard of the Mothman, but this story takes the legend to the next level. Great story!
5/5 red eyes!

No. 7 by William Marchese is crazy! This story has zombies and soldiers. Great story!
5/5 zombies!

Criatura by John Palisano is great! He breaks down in the desert. He runs into La Criatura, a desert creature with white fur. He finally makes it to his destination the next day, but he is different. He has transformed. Great story! I honestly have never heard of a Criatura until I read this story.
5/5 Criaturas!

Bitten by Christopher Powers will make your skin crawl! Charles goes to the Congo Basin on a trip and gets far more than what he was looking for. He finds a new species of spider in the sausage tree. The spiders are great hunters. One spider has hunted Charles down. Great story!
5/5 creepy-crawlies!

Kelpies by Leo X. Robertson is wicked! This is the first time that I have ever heard the term Kelpie before. A Kelpie lures a man into the water. Turns out he can go home anytime he likes, but he doesn't. Years later he meets his son. Crazy story!
5/5 wicked Kelpie!

Bloodstream Revolution by M.R. Tapir was a good read! This story is about Chupacabras during the Mexican Revolution. I enjoyed this story!
4/5 Chupacabras!

This is a great anthology that everyone should read! This book doesn't have any low points because the stories are balanced out so well. I highly recommend this book to fans of horror, tall tales, and legends!

5/5 bumps in the night!
Posted by Cedar Hollow Horror Reviews at 4:24 PM