The Boulevard Monster by Jeremy Hepler 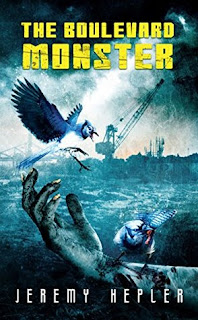 The Boulevard Monster is written in the first person, narrated by the main character, Seth Fowler. This book reads like a confessional. This book gets off to a pretty quick start when Seth finds a corpse in the back of a friend's truck. His friend goes missing, and that is when Seth is pulled into a job by the mysterious Luther. Seth doesn't seem to notice the blue jays. The strange man offers Seth a job that will give him the extra money that he has been needing. Seth is a construction foreman by day, and on occasional nights, he gets rid of bodies for Luther. Seth buries the bodies in his construction sites. The mysterious Luther knows all about Seth's family. Seth must never get caught or he will end up dead like his friend. After a while, things start to unravel. Seth's brother-in-law and the cops are on Seth's heels. Seth becomes paranoid, which makes the book that much better. I will stop there because I don't want to give anything away.

This book reads well. The story unfolds perfectly. There weren't many twists and turns, but this story didn't need many. It is the dread, the inevitability that something was going to happen. Jeremy Hepler does a great job of making the reader like the main character. Seth Fowler seems to be a genuinely good dude. This is a "what would you do" type of story that keeps you on the edge of your seat. The characters are easily relatable, and the author gives just enough background information about them. That ending was crazy! The reader has to decide whether or not they believe Seth's story! Was the story true or is Seth losing his grip on reality?

I thoroughly enjoyed The Boulevard Monster! I will forever be skeptical of blue jays! I can't wait to read Jeremy Hepler's next book!