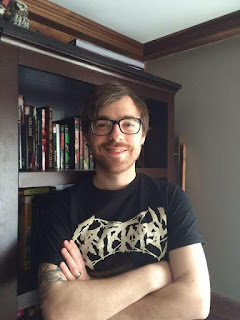 Hey, Patrick! Thanks for doing this interview!
CHHR: When did you realize you wanted to be a writer?
Patrick: Roughly five minutes ago. Kidding. I initially toyed with the idea in third grade when I wrote my first novel, an unauthorized Goosebumps book entitled The Cursed Scorpion. After that, I started writing monster stories on a fairly regular basis. In sixth grade, my English teacher, Mr. Price, told me I couldn’t write anymore of said monster stories because they weren’t normal. I didn’t listen to her and she resigned by the next year. I’d like to think I had something to do with that.
CHHR: What is your spirit animal?
Patrick: Does coffee count? Definitely coffee. If not, then a majestic wolf. I started buying majestic wolf items as a joke a few years back and eventually I realized I just liked majestic wolf items. There’s nothing ironic about it.
CHHR: What does your writing schedule look like?
Patrick: I try to do roughly 1,000 words every day but life gets in the way. I don’t have a whole lot of free time so I often have to sneak some words in during my day job lunch breaks or late at night. It all evens out. Last year, I was convinced I’d barely written anything at all. Until I tallied up my year-long work output: two and a half novels, a novella, and five short stories. Somewhere around 138,000 words. Those words—they add up after a while, even if it doesn’t feel like it.
CHHR: Do you have any interesting writing quirks? If so, what are they?
Patrick: Nothing outrageous. I typically need a cup of coffee in my hand at all stages of the process. I tend to procrastinate as much as possible in the moments leading up to the actual writing session, so as to get it out of my system. When writing, I need complete and utter silence. When editing, I prefer background noise and distraction.
CHHR: Do you use outlines or do you go with the flow?
Patrick: I go with the flow as much as possible. Outlines are too rigid for me but as I’ve gained more experience, I tend to do some light mental plotting. I prescribe to the “headlight theory,” which states that you can only see as far in to your writing as you would while driving at night with headlights on. You see maybe the next chapter or two but that’s it.
CHHR: How did publishing your first book change your process of writing?
Patrick: It taught me not to assume all of my work is garbage, though I still often do. The curse of being a writer, I suppose. I’d written six—count ‘em—six books before submitting my novella A Debt to be Paid, which was accepted by Don D’Auria over at Samhain. After that, I decided to just write the best book I could and submit it. Worst case scenario: it fails and I move onto the next one.
CHHR: What do you like to do when you are not writing? Any interesting hobbies?
Patrick: Most of my non-writing time is taken up by reading, but I consider that part of writing. Call it research if you want. If we’re not counting that, I watch quite a lot of horror movies and have a weekly review segment on the Dark Discussions podcast called Terror Tantrums. I also play guitar. Also, is coffee a hobby? Definitely coffee.
What do you think makes a good story?
Patrick: That’s a tough one. For me, it’s often the way in which a story is approached. I’d much rather read a familiar trope that’s written in a fresh way than a wholly original concept (if such a thing still exists) that’s written as boring as can be. Also, if you throw a cult into anything, I’ll devour it.
CHHR: What are you currently working on?
Patrick: I just wrapped the second draft of a novel about a demonic pop star. I think it might be good. One or two more drafts and I’ll be ready to shop it around. I have my next three books set up. It’s just a matter of finding the time for those daily 1,000 words. And maybe I’ll sleep at some point.
CHHR: What is in your TBR pile?
Patrick: Currently reading John Langan’s The Fisherman and digging it very much. Up next, I have Matt Hayward’s short story collection Brain Dead Blues, Megan Abbott’s You Will Know Me, and Josh Malerman’s Bird Box. Then I’m caught up. Aside from the 1.5 thousand other books on the list.
CHHR: What authors are you friends with, and how do they help you become a better writer?
Patrick: I’ve been lucky enough to become good friends with a plethora of authors who I deeply respect over the last few years. My buddy Matt Hayward (see TBR list above) and I recently co-wrote a novel that I’m quite proud of. Kind of like Nightmare on Elm Street meets True Detective. It taught me a lot about collaboration that had been missing from my vocabulary. Then there are Adam Cesare, Matt Serafini, and Tony Tremblay and a billion others. The horror fiction community is a welcoming bunch of nerds that I hold close to my heart.
CHHR: Do you have any advice for writers who are just starting out and trying to get published?

Patrick: First, read a bunch, then write a bunch. You’re probably going to suck at first and want to give up but if you keep doing it, you’ll miraculously get better. Also: take it seriously. If you go a couple days without writing and you aren’t getting cranky or antsy, this probably isn’t the venture for you. The same goes for issues with rejection or criticism. Go do something less soul-sucking like bowling or origami. Trust me: you’ll be much happier. But if you truly dig pouring your heart and soul into making stuff up, don’t let anyone tell you to give up.
Author Bio:  Patrick Lacey was born and raised in a haunted house. He spends his nights and weekends writing about things that make the general public uncomfortable. He lives in Massachusetts with his Pomeranian and his muse, who is likely trying to kill him. Find him on Facebook, follow him on Twitter (@patlacey), or visit his website at    https://patrickclacey.wordpress.com. 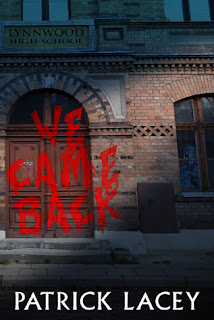 Patrick Lacey will be donating all his proceeds from We Came Back to the American Cancer Society in memory of his dad, who lost his battle with cancer.
Fuck cancer! (excuse my language) Let's all punch cancer right in the dick by buying We Came Back by Patrick Lacey.
Praise for Patrick Lacey
"WE CAME BACK is an emotional trip through our darkest fears. One of the best books I've read in years."--Kristopher Rufty, author of SOMETHING VIOLENT, DESOLATION, and JAGGER.
“The man's imagination is incredible. A must read!!!!” – David Bernstein, author of A Mixed Bag of Blood
“It's a rare and joyful thing for me to read a book and realize I'm in the hands of an author who can go absolutely anywhere, who works without a formula and without a net. Such is the case with this stellar debut collection.” – Russell Coy, author of The One Who Lies Next to You
“Patrick Lacey’s Dream Woods works a razor’s edge into an after school special.”
– Unnerving Magazine
Posted by Cedar Hollow Horror Reviews at 7:06 PM