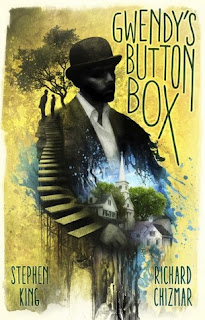 I have been waiting for this book for a while now! I bought the autographed hardcover from Cemetery Dance Publications!

12-year-old Gwendy Peterson runs up and down the Suicide Stairs in the summer of 1974. She wants to lose weight because she doesn't want to get picked on. One day, a man in black jeans, a black coat, and a black hat sits on a bench in the shade at the top of the Suicide Stairs. The man in black has appeared in Stephen King's work for a while now. The man in black is known as Randall Flagg, R.F., Walter O'Dim, but in this story, he goes by the alias Richard Farris. After they converse, Richard Farris gives Gwendy a button box. The box has buttons and levers. I won't tell you what the buttons are for, but the two levers are for rare coins and chocolates. The coins are for her to use as she sees fit. The chocolates increase Gwendy's intelligence and get rid of her hunger. I will stop there because I don't want to give too much away.

Gwendy's button box is great! I read this novella in one sitting! I couldn't put it down! The story unfolds quickly and the chapters are short. The two authors voices flow well together, but there are a few times that you can tell who wrote certain parts if you are familiar with the authors' work. I have seen mixed reviews about this novella and I honestly don't know why. Gwendy's Button Box showcases Stephen King's and Richard Chizmar's writing skills. This little book packs a powerful punch! I hope Stephen King and Richard Chizmar collaborate again soon!

After reading this novella, I think the button box had something to do with the explosion in Castle Rock, Maine.