DREAMING AT THE TOP OF MY LUNGS: A HORROR COLLECTION by Israel Finn 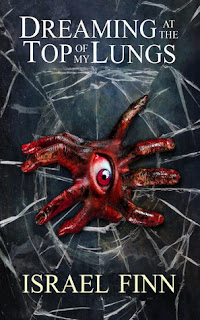 I have heard great things about Israel Finn's writing. I've been wanting to buy this collection for a while, but I was hesitant because of the price. After reading this great collection I can safely say that it is well worth it!

This collection is filled with ten dark tales. These tales will make you think twice. Most of these stories are relevant given the times that we live in.

Israel Finn gets the collection going with Stranded. Have you ever needed some time alone? You will probably think twice before saying that after you read Stranded. A man is caught in a bizarre time loop.

No Such Thing As Monsters is about a little boy who has a monster under his bed. His father tells him there is no such thing as monsters. The father is wrong! Awesome story!

Sick Day is great and it will make you gag!

The Messenger is one of my favorite stories in this collection! It is a think piece about society, and how people lose their voice when they don't want to get involved. I can hear the chainsaw! I can feel her tongue being pulled out!

Water and War is a great story about an alien! Thought-provoking!

Stones is another story that will make you think!

Deathbed is about a father who is dying at the hospital. His son has a promise to make, and he wants his dad to hear it before he dies. Great story!

To Catch a Fly is written in a journal format by an inmate named Eddic. It is basically Eddie's autobiography about why he is in prison. Great story!

Ugly is one of my favorite stories in this collection! This story is about a bus ride that has a wide variety of characters including an ugly old lady. This story will make you think about the meaning of the word ugly. Great story!

This is my first time reading Israel Finn, but it won't be my last! I will definitely read his other work! Each story makes you think. It is a thought-provoking collection that will make you think about the subject matter long after you are done reading it.

I highly recommend this short story collection to fans of horror!