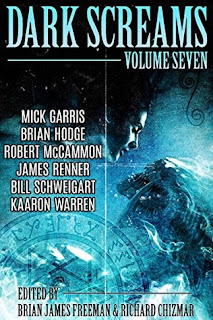 This is probably the best anthology that I have read in quite a while! There are two short stories that were previously published by Cemetery Dance Publications, which are LIZARDMAN and SNOW SHADOWS. This anthology contains some great authors! I'm talking about Kaaron Warren, Brian Hodge, Mick Garris, Robert McCammon, Bill Schweigart, and James Renner! Each story packs a powerful punch! This is definitely the best Dark Screams so far! There isn't a bad or mediocre story in this anthology.

LIZARDMAN by Robert McCammon: An old swamp rat by the name of Lizardman goes gator hunting in the Florida swamps. Legend has it that a pesky gator called Old Pope lives in the Florida swamp. Lizardman confronts Old Pope, and gets far more than what he was looking for! A great story!
5/5 gator skins!

A MONSTER COMES TO ASHDOWN FOREST (IN WHICH CHRISTOPHER ROBIN SAYS GOODBYE) by James Renner: This is a great story about a geriatric Christopher Robin who wants to visit the Hundred Acre Wood one last time. This is a creepy and unique story! One of my favorite stories in this anthology!
5/5 honey jars!

FURTHEREST by Kaaron Warren: The dunes hold a mysterious secret waiting to be discovered. The story unfolds perfectly. This is a spooky story about corpses, cookouts, and campfires.
4.5/5 corpses!

WEST OF MATAMOROS, NORTH OF HELL by Brian Hodge: A popular band heads to Mexico for a photo shoot, but the trip doesn't go as planned. The band has fans in Mexico that are willing to kill to find out where they get their inspiration from.
4.5/5 stars!

THE EXPEDITION by Bill Schweigart: Hitler orders Lieutenant Dietrich Drexler to lead a team of soldiers and scholars into the ruins in the Carpathian Mountains. The mission is to find artifacts that could result in new insights about the history of the Aryan race. The mission is derailed by a wolf that tracks their journey. A great historical horror story! One of my favorite stories in this anthology!
5/5 fangs!

SNOW SHADOWS by Mick Garris: A school teacher has a one-night stand with a colleague. A tragic story about suicide and a deadly rivalry. An excellent winter horror story that will stay with you long after you read it!
5/5 stars!

I highly recommend this anthology to fans of horror!