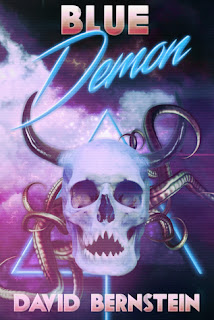 Blue Demon is awesome! Have you ever owned an action figure that cost your parents a fortune? I remember when Teenage Mutant Ninja Turtles and Street Sharks were a big deal. Today, those toys sell for some good money, but not like the Blue Demon. Nope. The Blue Demon action figure is one of a kind! To be honest, I wish I could own one.

David Bernstein doesn't hold back when it comes to putting his characters in terrible circumstances. Blue Demon is about Dan (husband), Jackie (wife), and Calvin (son). Calvin is doing better in school, so Dan wants to get him something cool. Dan decides to buy his son a Blue Demon action figure based on an old TV show. The legend says that the Blue Demon was a deity of some lost tribe of the Amazon. Blue Demon was called to protect the tribe against invaders and exact vengeance on anyone who harmed the tribe. The Blue Demon's loyalty is forever, as long as you remain righteous.

Blue Demon is a great novella! It brings back my childhood! The characters are relatable. David Bernstein makes you feel for the main characters. Then, enters Blue Demon with all of his glory to annihilate those who have wronged Calvin and his family.

David Berstein doesn't disappoint! I thoroughly enjoyed this book! It is sad, funny, and full of gore! I've never seen characters go through as much as Jackie and Calvin did! Blue Demon is smooth and the storyline unfolds perfectly. What is more, I winced throughout this book. 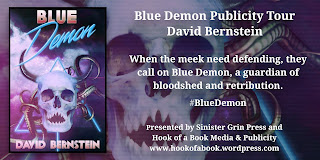 Follow along the tour with these hashtags: #BlueDemon  #SinisterGrinPress

Blue Demon synopsis
When the meek need defending, they call on Blue Demon, a guardian of bloodshed and retribution. Its loyalty is forever, as long as you remain righteous.
For those that oppress the demon’s flock, life grows short. It kills in the most brutal fashion, and maims those it most despises. It has no feelings, only loyalty and devotion for the ones it protects.
Of course, this is all from the Blue Demon television show and Cal Langston, Blue Demon’s biggest fan, knows such things can’t be real, at least not until the people who messed with him start dying in the most horrific of ways. Frightened and not sure what to believe, he sets out to discover what is truly going on, and if Blue Demon is for real, does he want it watching over him? 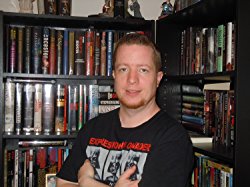 Biography of David Bernstein
David Bernstein is originally from a small town in Upstate New York called Salisbury Mills. He now resides in NYC and misses being surrounded by chainsaw-wielding maniacs and wild backwoods people that like to eat raw human flesh. He’s grown used to the city, though hiding bodies is much harder there. He is the author of Amongst the Dead, Damaged Souls, The Tree Man, Witch Island, Relic of Death, Apartment 7C and the forthcoming Episodes of Violence. David writes all kinds of horror, from hair-raising ghost stories to gore-filled slashers and apocalyptic tales of terror. He loves hearing from his readers. You can reach him on Facebook, at www.facebook.com/david.bernstein.3. Visit him at his website: davidbernsteinauthor.blogspot.com email dbern77@hotmail.com, or on Twitter at @Bernsteinauthor.
Praise for Blue Demon
Praise for David Bernstein
"David Bernstein delivers a fast-moving tale of desire and destruction that gives new meaning to the words, 'Be careful what you wish for.' Relic of Death twists reality and will leave you reflecting on your own personal Achilles heel long after you finished reading…" —Allan Leverone, author of Mr. Midnight
"A fascinating, unpredictable, ever-shifting tale of greed and desperation. Highly recommended!" —Jeff Strand, author of Pressure
“Fast-paced, cinematic, and excellent. Horror fans gather around, it’s time for another chilling tale from David Bernstein.”  —Keith Deininger, author of Within and Ghosts of Eden