There is Darkness in Every Room by Brian Fatah Steele 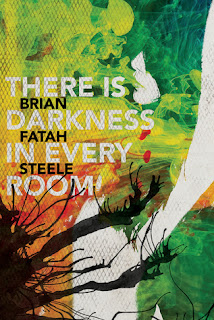 There is Darkness in Every Room is about Tanner Kokinos, a lady who has been abducted by aliens multiple times during her childhood. She just wants to feel like a normal college student at Berkshire State University. Some college students are killed in horrendous murders, while others mysteriously vanish. Tanner tries to find out the secrets behind her abductions. The story unfolds perfectly, and the story is told from multiple viewpoints. Tanner finds out that there is a celestial game that stretches through time and galaxies. Aliens are threatened by the fact that humans can unlock the secrets of the stars. Humans can also go to their communion site. The characters are memorable! Tanner is a great lead character, Donald is a Vietnam veteran, and Graham is an alien. There are some characters that you will absolutely loathe.

There is plenty of gore and killing going on to satisfy any horror fan! There are gray aliens, disembodiment, skinning, gutting, naked ladies, donuts, Taco Bell, and lots of blood. If you start to hear flies, please run for your life! They come through the darkness. They are everywhere!

If you are a fan of The X-Files, Extraterrestrial, The Fourth Kind, or aliens in general, then you are going to thoroughly enjoy this book! There is Darkness in Every Room is a fast-paced read from start to finish. It is a relatively quick read that you can finish in one sitting. There is a lot going on in this book, but Bian Fatah Steele manages it very well. With that being said, I think everyone should read this book!

I highly recommend this book to fans of horror and science fiction! 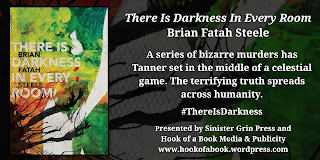 Follow along the tour with these hashtags:
#ThereIsDarknessInEveryRoom #SinisterGrinPress #alienhorror

There Is Darkness In Every Room, Synopsis
Print Length: 248 pages
Publisher: Sinister Grin Press
Publication Date: March 24, 2017
Even as a young woman, Tanner is haunted by childhood nightmares of alien abduction. She’s trying to find her place in college, but a series of bizarre murders on campus isn’t helping her paranoia. Tanner just desperately wants to be normal, but finds herself in the center of a celestial game, the players beyond comprehension. The terrifying truth spans across humanity, and there is no hope, there is no tomorrow. There is darkness in every room.
Brian Fatah Steele, Biography

Brian Fatah Steele has been writing various types of dark fiction for over ten years, from horror to urban fantasy and science fiction. Growing up hooked on comic books and monster movies, his work gravitates towards anything imaginative and dynamic. Steele originally went to school for fine arts but finds himself far more fulfilled now by storytelling. His work has appeared in such places as 4POCALYPSE, BLOOD TYPE, DEATH’S REALM, IDOLATERS OF CTHULHU, PAYING THE FERRYMAN, CTHULHU LIES DREAMING, and the Bram Stoker Award-nominated DARK VISIONS, VOL.1. His own titles include the urban fantasy novel IN BLEED COUNTRY, the post-mythic novella collection FURTHER THAN FATE, and the dark sci-fi collection BRUTAL STARLIGHT. Steele lives in Ohio with a few cats and survives on a diet of coffee and cigarettes. He spends his time still dabbling in visual art, vowing to fix up his house, acting as a part-time chaos entity, spending too many hours watching television, and probably working on his next writing project. 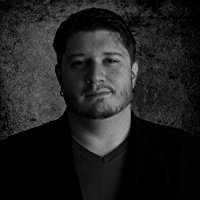 Praise for Brian Fatah Steele
“So, here, we have a set of tales from Steele that run the gamut, from the terrible to the sublime. In all honesty, Steele rarely forays into the realm of sci-fi, finding his bliss mostly in fantasy and horror. However, in this array of stories he seems to be channeling Brin and Bloch, rather than Barker and McCammon.”
–CL Nicolas-Stegall on Brutal Starlight
Purchase
Amazon
Available on other online retailers as well such as Barnes and Noble, Kobo, etc! Order from your local indie bookstore or ask your library to carry.
Want to Feature?
If you’re a book blogger or media site and would like to feature Brian Fatah Steele or review There Is Darkness In Every Room, contact Erin Al-Mehairi, marketing/PR at Sinister Grin Press and Hook of a Book Media, at hookofabook@hotmail.com.
Posted by Cedar Hollow Horror Reviews at 2:58 PM