Just After Sunset by Stephen King 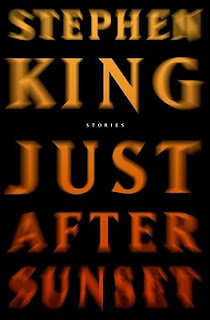 I have read Just After Sunset numerous times! Have you ever read something that just stuck wth you long after you have finished reading it? To me, Just After Sunset is one of those things. I have to give you some background about this short story collection and two other novels by Stephen King. I had just broken my hip in the military, and I was sent home on leave to heal and recover. I was bored, so I went to a local second-hand bookshop. I looked high and low for something to read, but nothing seemed to catch my eye. I asked the feeble old lady behind the counter for some recommendations. She said I should read Stephen King. I had never read anything by Stephen King before. I was open-minded, so she led me to the back corner of the store and that is where I discovered Stephen King. She recommended Just After Sunset, and I picked up The Dead Zone and Duma Key. I went home, popped my pain pills, and began reading. It was one of the best experiences of my life. To tell you the truth, I'm sure everyone has a Stephen King book and a good story to tell. (Feel free to share a Stephen King book and a story in the comments section.) Just After Sunset is a short story collection that contains some of my favorite short stories.

Willa is about a train derailment, which leaves its passengers stranded. David Sanderson's wife walks away from the station and David looks for her. This is a great ghost story! The people on the train don't realize that they are dead, so they are having to deal with their fate.

Gingerbread Girl is about a divorced wife named Emily. She starts running on the beach. Her life is starting to look up when she runs up on a killer. This story is great! The killer is after Emily, so she runs for her life!

Harvey's Dream is about a couple in a boring relationship. The wife is surprised when her husband decides to share a dream of his with her.

Rest Stop is about a writer who stops at a rest area to use the bathroom. He interrupts a man beating his wife. This is a good story!

Stationary Bike is one of my favorites! It is about an overweight commercial artist who gets a stationary bike. That is when the story really takes off!

The Things They Left Behind is about a 9/11 survivor. Objects belonging to his deceased co-workers start appearing in his apartment.

Graduation Afternoon is about a young woman who is goes to one of her boyfriend's family gatherings for the last time. This one is great!

N. is about a psychiatrist who commits suicide. His sister reads the patient file he was working on when he committed suicide. The patient was N. and he had OCD. This one is the best out of the collection!

The Cat From Hell is an older story about a pharmaceutical millionaire who hires a hitman to kill a cat. It was a good story. It was in Dark Side: The Movie back in the early 90s.

The New York Times at Special Bargain Rates is about a woman he receives a phone call from her dead husband.

Mute is about a man who finds out his wife has been cheating on him. The man picks up a deaf-mute hitchhiker and bares his soul. Was the man really mute?

Ayana is a story about miracles.

A Very Tight Place is about a guy who gets trapped inside a Johnny-On-The-Spot by his neighbor. This is a great revenge story!

You may not agree that this is a great short story collection, but this was my introduction to Stephen King. If you like Stephen King, then you should give this collection a read.