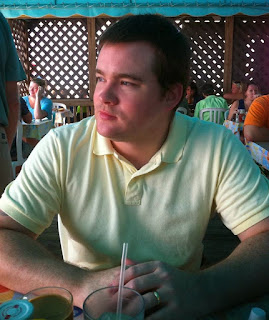 Stephen Kozeniewski is a horror and science fiction author. His last name is pronounced "causin' ooze key." He is an Iraq War veteran and was awarded the Bronze Star, which is no small feat. Stephen has published numerous books and short stories. His work includes The Hematophages, Hunter of the Dead, Every Kingdom Divided, and The Ghoul Archipelago.

And as for new work, I’m working on a haunted house (sort of) story.  I’m thinking right now this one will be called THE PERFECTLY FINE HOUSE, but it’s still in a very preliminary stage, so we shall see.
This is my first author interview. Stephen, thank you for doing this interview! You can learn more about Stephen Kozeniewski at http://manuscriptsburn.blogspot.com. You can also visit his Goodreads and Amazon pages. I will definitely be reading his other works!
Posted by Cedar Hollow Horror Reviews at 6:41 PM