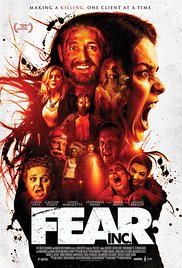 Fear, Inc. is funny and it's similar to The Game (a movie from the 1990s). Joe is an unemployed horror buff living off his girlfriend and her wealth. Joe invites Ben (childhood friend) and his wife, Ashleigh, over to celebrate Halloween. Joe is looking for a truly horrific time, but he isn't satisfied. He is given a Fear, Inc. business card at a haunted house by a random stranger. Fear, Inc. is a custom-scare service that tailors realistic horror experiences that guarantee a horrific time. Joe tries to talk Ben into playing Fear, Inc., but Ben tries to warn him against calling the company. Ben's boss had tried Fear, Inc. and hasn't returned to work since. Joe drunk calls the Fear, Inc. number and a man tells them that they are all booked up, so Joe forgets about it. Fear, Inc. starts creating horrific movie scenes at Joe's house, from Friday the 13th to The Shining to Saw. Things start to get a little too real for Joe's liking, and he begins to question what's going on.

Masciale has his characters reference The Game in the movie, which I thought was cool. Masciale also references several horror franchises in the movie. I didn't really care for Joe because he isn't a very likable guy. I cared more for the other three characters. I like how they showed the secrets of Fear, Inc.

I also had a problem with the four endings. Yes, you read that right. Four endings! The false endings were played out by the time the real ending happened. The ending was predictable because of the three false endings.

I had fun watching this movie, but I wish they would have cast another lead character. I didn't care for Joe like I did the other three characters. The heavy horror franchise referencing was awesome! I would definitely watch it again.

I recommend this movie to fans of horror!