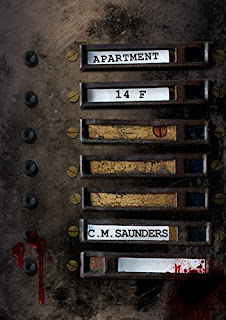 Jerry leaves London for Beijing to teach English. Everything seems to be going smooth,  but his predecessor mysteriously disappeared. He moves into his predecessor's old apartment, which is 14F. Jerry begins having strange dreams about a ghost in his apartment. He starts hearing things. The lights in his apartment flicker from time to time. Sometimes the lights go out unexpectedly. He finds his predecessor's boarding pass in the apartment, so he does some investigating. Jerry's assistant tells Jerry about a fortune teller who not only sees the future but sees the truth. I will stop there because I don't want to give anything away. This novella is a great atmospheric read! The ending was great too!

Apartment 14F also has a bonus short story called Little Dead Girl, which is a quick, scary read. It is about a teacher named Jeff who lives in China. He starts seeing a dead girl everywhere.  He thinks he is going insane. Is he insane or is he seeing a real ghost? This was a great short story! I didn't see the ending coming!

I recommend this book to fans of The Ring and The Grudge!

You can get the book here.