The Shell Collector by Christopher Golden 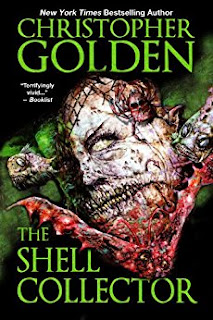 Richie Feehan is a part-time lobsterman and full-time painter. Richie seems something terrible and nightmarish in the ocean surf, but he keeps it to himself because he doesn’t want anyone thinking he is crazy. He goes out several days later to haul in his lobster traps. He finds one of the nightmarish things attached to one of the traps. It turns out to be a corpse. Ironically, she had been waked at his family’s funeral home, Feehan & Sons. Richie’s brother runs the funeral home. Something has been stealing bodies from the local grave. Richie begins looking for answers.
Christopher Golden is a great author and this novella proves it. It was a one-sit, quick read. I wanted to know what was going to happen next. There were two things that I didn’t like about the story. I didn’t like how rushed the ending felt, and it didn’t wrap up a particular loose end that I wanted it to. With that being said, the characters are great and the storyline flows nicely. I will definitely read more of Christopher Golden’s work. I highly recommend this book to horror fans!
5/5 stars!
Posted by Cedar Hollow Horror Reviews at 7:01 PM