The Raft by Stephen King 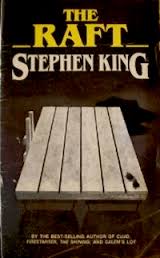 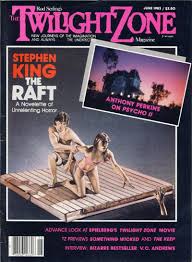 The Raft by Stephen King is probably the scariest short stories that I have ever read in my life. I love Stephen King's work, and I have read several of his stories and books, but this one takes the cake. The Raft is about four college students (Randy, Deke, Rachel, and LaVerne) that go to a random lake in Pennsylvania for a swim to celebrate the end of summer. They decide to swim out to a wooden raft in the middle of the lake, and that is when everything goes wrong. Stephen King is so descriptive with all the gut-wrenching terror that soon follows. The author writes in such a way that makes you feel like you are on the raft with the characters. The author makes you feel like the characters are running out of time as soon as they climb up on the raft. This story is definitely a nailbiter! It is a quick read, but it will have you yelling at the book, trying to help the characters. This story is a great take on the whole monster in the lake scenario. What lurks in the lake? You will have to read it to find out!

Stephen King turned The Raft into a short film in the horror anthology, Creepshow 2. The short film is not as good as the short story, but it is still entertaining. The ending changed when it became a short film. I think that both endings are good, but I think they should make a new film based on the story because the film could have been much better.

I highly recommend this short story to fans of horror and Stephen King!