The Hatching by Ezekiel Boone 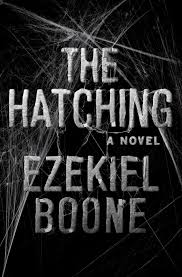 Ezekiel Boone has crafted a book that will make your skin crawl! This book is about spiders! Deep in the jungle of Peru, a black mass devours an American tourist. A plane crashes in Minneapolis and the FBI investigate. What they find is both disturbing and gruesome. In China, the government accidentally drops a nuclear bomb in an isolated region of its own country.

The Hatching is about a spider invasion, so if you have Arachnophobia you might want to avoid this book. The story is about a scientist named Melanie and FBI agent named Mike Rich. The President of the United States is a woman, which I thought is great! The author introduces all of the characters at the beginning of the book, which slowed the pacing of the story at first. The story switches back and forth between the different characters, allowing the reader to see from their point-of-views. The storyline was smooth and the pacing was right on. That ending threw me off! I didn't see it coming! I'm ready for the sequel!