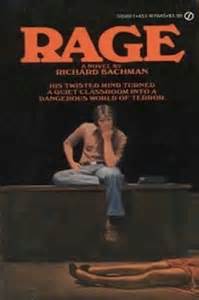 Rage was written by Stephen King under a pseudonym, Richard Bachman. This novella is no longer in print due to all of the school shootings that have occurred over the years (Stephen king pulled the book from the shelves).

A disturbed high-school student named Charlie Decker with authority problems kills one of his teachers and takes the rest of his class hostage. Will anyone else survive? This novella is set over the course of one long, hot afternoon. Charlie Decker explains to the class what led him to this drastic sequence of events. He also begins to deconstruct the personalities of each of his classmates. He forces each of them to justify his or her existence.

Rage is a quick read, and at times it seemed petty and shallow. I guess it doesn't take much to set off a high school student. I thought the reasoning behind Charlie Decker's actions are minuscule in the grand scheme of things, but nonetheless, he is tipped over the boiling point and begins his rampage. I have never read anything like this novella before in my life. This novella looks at some very heavy and relevant subject matter. It is a good read, and I think everyone should read it at least once in their lifetime. I don't think this book should have been discontinued, but I respect Stephen King for doing so. With that being said, this novella was a smooth read.

I highly recommend this book to fans of horror and Stephen King (Richard Bachman)!