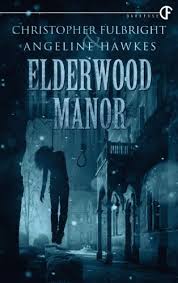 Good Atmospheric Read!
Bruce and his son (Cody) visit his elderly mother after receiving a phone call from her. The old family home is called Elderwood Manor. The manor has a creepy history. The manor was built in the 1800s by a man who claimed he was a master of the Occult. Bruce and his son end up having to spend the night in the haunted mansion. I’ll stop there because I don’t want to spoil the rest.
The authors build upon the tension and atmosphere they created early in the story. When I hear cracks and groans in my house, I will surely think of this book. The pace was a little off in some parts of the story, but overall, it had me on the edge of my seat.
I recommend this book to anyone who likes a good story about a haunted house. I also recommend this book to fans of horror and suspense.
4/5 stars!
Posted by Cedar Hollow Horror Reviews at 6:33 AM