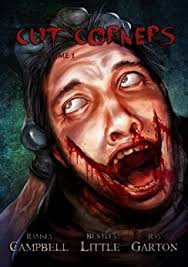 The first short story was about an old man who walked around looking for the train station. I thought he had Alzheimer’s, and got lost, but that wasn’t the case at all. He followed the voices until he ran into a mob of the undead.
The second short story is about two women who have a conversation in the waiting room of a dentist office. One of the ladies talked about how she had killed a man for being a man, which she found gross. The two ladies were nonchalant about it.
The third short story was set in the near future, and the world had changed. Star shaped bugs started coming out of people and living in the walls of their homes. The bugs consume people, eating the flesh off of people’s bones.
This was a good horror short story collection. I highly recommend this for fans of horror or suspense!
4/5 stars!
Posted by Cedar Hollow Horror Reviews at 6:28 AM